The Future of the Church in the Financial Order

Last October, a bold proposal to reform the global financial system came from an unexpected source: the Catholic Church. As the eurozone teetered on the brink of economic chaos, the Pontifical Council for Justice and Peace -- a body of the Roman Curia that advises the pope on economic justice, peace, and human rights -- issued "Towards Reforming the International Financial and Monetary Systems in the Context of Global Public Authority" (more simply called the "Note"). The Council's goal in publishing it was explicit: the Church wanted to attract the attention of world leaders as they assembled to discuss ongoing turmoil in financial markets at the G-20 Summit in Cannes and to add its voice to those arguing for capital controls (such as the "Tobin tax") to discourage international financial speculation. Then, early last month, during his keynote speech for the New Year to diplomats accredited to the Holy See, Pope Benedict XVI reinforced the call for ethics in the global economy. The Pope's words echoed the Note's urgent call for new, even radical thinking about the rules and institutions governing the global economy.

The Note argued that the root cause of today's economic woes is the growth of excessive credit and monetary liquidity in the past few decades, which, in turn, inflated asset bubbles and set off a succession of debt and confidence crises. It also held that the lack of regulatory controls on international finance exacerbated the problem -- in other words, that the pace of economic globalization has been out of control. The resulting instability and economic inequality means that the world now requires "a system of government for the economy and international finance." Once world leaders recognize, the Council argued, that increasing global interdependence is forcing countries to move beyond a Westphalian, or state-based, international order, they will be more prepared to cede their own sovereignty in the interests of global humanity's common good.

Considering the Church's history and its social doctrine, its call for a supranational authority is hardly a surprise. The Church has long viewed nation-state sovereignty as a challenge to its autonomy. Historically, it was far more comfortable operating in more fluid internationalized settings, such as during the Holy Roman Empire or Medieval Christendom. The devastation of World War II convinced senior European Catholics that the power of nation-states had to be tamed. This helps to explain why the Church was such an advocate of European unification. Indeed, prominent Catholics such as the former French Prime Minister Robert Schuman were central players in the processes set in motion by the 1957 Treaty of Rome. Six years later, Pope John XXIII endorsed the idea of a world authority, a call reiterated in all subsequent popes' social teachings. The Church has avoided identifying such a body specifically with the United Nations. And it has tended to describe such an authority's functions in very general terms such as "coordination." But the logic is that if the conditions that facilitate human flourishing increasingly transcend national boundaries, the modern state's claim to be the highest political authority capable of coordinating such conditions is unwarranted. In practical terms, some Church officials calculate that a world authority would be easier for the Church to navigate than a global order of sovereign nation-states.

Yet a world authority could pit the economic interests of Catholics in developed countries against those in developing nations, creating challenges for how the Church presents its teachings about economic issues to Catholics throughout the world. Many countries throughout Latin America, Africa, and Asia are in a fundamentally different economic and geopolitical place from those of the ailing EU. The Church must thus deepen its appreciation of how the global operation of economic factors such as comparative advantage, incentives, and tradeoffs has different impacts upon Catholics living in very dissimilar economic circumstances. But this also has implications for the Church's position concerning the economic functions to be assumed by a world authority. Such responsibilities, for example, could primarily concern promoting greater economic integration through removing obstacles to trade. This, however, would be incompatible with the Note’s theme that a world authority’s economic functions should be focused upon securing greater control over the pace of change through international regulations that, if implemented, would significantly impede the free movement of people, goods, and capital.

While the Church's senior leadership is disproportionately European in composition, the Catholic Church's epicenter in raw numbers has shifted to the developing world. According to statistics contained in the Vatican's 2011 Annuario Pontificio, European Catholics now account for just 24 percent of the world's 1.18 billion Catholics. In 1948, the equivalent was about 49 percent. Today, almost 50 percent of all Catholics live in the Americas, and most of them south of the Rio Grande. Demographically, the European Church has stagnated for three decades. But its expansion in Africa, Asia, and Latin America in the same time period has been staggering. Between 2005 and 2009 alone, the number of African Catholics grew from 135 million to approximately 158 million.

These realignments parallel changes in the economic path pursued by many of the developing nations in which most of the world's Catholics live. In recent years, economic growth has taken off in many developing countries at a pace that dwarfs European growth rates. Over the last three decades, many such countries (Chile and Brazil being prominent Catholic examples) have gradually moved away from top-down economic planning toward greater openness to global markets as a primary way to diminish poverty and spur economic growth. Within Catholic social teaching, there is considerable support for such market-oriented paths. Since 1991, Catholic social doctrine has re-emphasized that developing nations have a right to freely access networks of global exchange. The free trade and anti-protectionist implications of this principle were spelled out in John Paul II's encyclical Centesimus Annus and reiterated in Benedict XVI's 2009 Caritas in Veritate. How this fits, however, with the Church's ongoing emphasis on the need for a world authority -- and, more immediately, with the Note's call for capital controls -- needs to be clarified.

Moreover, the Church's teaching on these matters is grappling to accommodate the growing divergence between the immediate economic expectations of Catholics in developed European nations and those living in emerging economies. For Catholics in developing countries, economic globalization is a way out of poverty. This helps explain why some traditionally Catholic countries such as Colombia, Guatemala, Mexico, and Panama have pushed for free trade agreements with the United States, while others, such as Brazil, have pursued trade agreements within Latin America. Likewise, African countries with large Catholic populations, such as Kenya, Rwanda, Tanzania, and Uganda, have pursued regional trade agreements as steppingstones to wider entry into global markets.

By contrast, many Catholics in Western Europe see the same forces released by economic globalization as creating pressures to lower their countries' regulatory barriers, reduce their wages, phase out subsidies, and rethink the high tax levels needed to pay for strong welfare states. Not surprisingly, many Europeans are reluctant to go down paths that represent a departure from postwar policies.

The tension between these two groups presents the Catholic Church with three significant and interrelated challenges. First, it must ensure that its emphasis on supranational institutions as a way of managing globalization is not interpreted as reflective of a desire to protect EU states from increasing competition from developing nations. Any appearance of protecting wealthy Europeans at developing countries' expense would be considered inconsistent with the Church's stated commitment to social justice and would risk alienating many Catholics in developing nations.

Second, the Holy See will increasingly find itself lobbied by European leaders as well as those of developing nations to lend its influence to the realization of incompatible economic objectives. What stance, for example, should the Church adopt toward agricultural subsidies? Many Europeans see subsidies as ways to protect European farmers from economic extinction. Africans and Latin Americans, however, are inclined to view the same EU subsidies as measures designed to blunt developing countries' increasingly competitive edge in agriculture. In such debates, who will the Church end up supporting?

Third, the Church's leadership faces an intellectual challenge. On the one hand, the Church advocates a world authority that manages globalization in the interests of economic justice. Yet it is equally committed to open markets, also as a matter of economic justice. Reconciling these two commitments will be a major test for Catholic social doctrine. Open global markets certainly need rules. But how would a world authority engage in top-down global economic management without significantly compromising the competition that flows from open economic and financial markets?

The Catholic Church is not in the business of exercising "hard power." But it certainly shapes people's minds, whether through the daily preaching of thousands of Catholic clergy, the formation imparted by its countless educational institutions, or the unique bully pulpit it possesses with the papacy. This is no guarantee that predominately Catholic countries will simply fall into line with the Church's teaching on global economic governance issues. The Church is, however, in a position to shape millions of people's attitudes. In an increasingly global public square, the influence exercised by a Church whose name means "universal" and which, as a religious organization, possesses an unrivaled worldwide presence means that when it makes pronouncements about global economic reforms, it should consider making requests that are consistent with its own future. 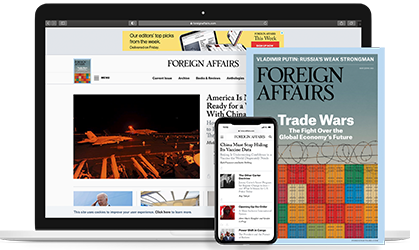