The Value of Leadership in an Uncertain Age

Often, vulnerabilities of a system become apparent only after the system fails. The pandemic crisis involving the pernicious COVID-19 virus has exposed massive shortcomings in local, national, and global systems across the board. While, rightly, much attention is given to the humanitarian and medical threats of this deadly virus, an examination of leadership aspects of this challenge is well-justified. The authors offer a perspective they have gained in over 40 years of combined experience in graduate leadership education. The central premise is that leaders need a unique set of higher-level depth, wisdom, and knowledge that can best be grown and fostered through advanced graduate studies in “scholar-practitioner” focused doctoral programs.

The expansion of human knowledge has grown at an exponential rate leading to a phenomenon typically referred to as “pace of change” or “the hyperconnected world” in popular writing. The main culprit credited for these discussions is Buckminster Fuller, a 20th Century American journalist who worked as a “comprehensive anticipatory design scientist.” He is credited for one of the quotes most often used in “change” literature, the “knowledge doubling curve” from his 1982 book Critical Path. Fuller observed that “Until 1900 human knowledge doubled approximately every century. By the end of World War II knowledge was doubling every 25 years.”

More recent evidence shows this growth rate of knowledge occurs in different fields. A 2011 study in “Transactions of the American Clinical and Climatological Association” stated that “Medical knowledge has been expanding exponentially. Whereas the doubling time was an estimated 50 years back in 1950, it accelerated to 7 years in 1980, 3.5 years in 2010, and a projected 73 days by 2020.” One recent study claimed that scientific knowledge doubles every five years.

Regardless of what the magical number for doubling of information or knowledge is, the clear message is the threat of obsolescence and irrelevance. Twenty years ago, Digital iPhone (2007), rearview cameras, HDTV, Social media, Paypal, Myspace, Facebook, Instagram, Cloud storage, ZOOM, and many other technologies did not even exist on the drawing board. Ebay and Amazon were in their infancies. Internet phone modems were too slow to allow downloadable content. Even now and the now nearly defunct Blockbuster video was the place to go to avoid movie theaters. As we write, newspapers, books, and movie theaters are on the frontline of an irrelevance battle. The Hechinger Report in April 2017 asked if a college degree was outdated. The Smithsonian Magazine in January 2018 echoed the same sentiment wondering if traditional colleges and universities are becoming obsolete.

Career obsolescence remains a constant threat in this ever-evolving sea of unpredictability. Recently, Oxford University studied 702 presently viable occupations. The researchers conducting the study warned that 47%, approximately one out of two occupations in the study, are likely to be automated over the next few decades. Bigthink.com in June 2019, citing the above study, went on to elaborate that “an estimated 65% of children entering grade school will wind up working in professions that don't exist yet.” About 54% of Americans believe that they need to train continuously to keep up with their changing workplace, and nearly 50% of the knowledge learned during the first year of a four-year technical degree will be out of date by the time the student graduates. Even safe occupations such as accounting are not spared the threat of obsolescence. A 2019 report on pwc.com indicated“40% of the accounts payable process can be automated [now]. Furthermore, trusting a robot with the Accounts Payable processes improved accuracy by 6.74%.”

The quest for the ever-changing optimum skills to survive automation, obsolescence, or irrelevance has occupied experts for at least a decade, since the phrase “constant change” became part of our lexicon. The Society for Human Resource Management (SHRM) reported in 2019 the five essential skills missing in job applicants (see Figure 1). Note that 82% of responses to “missing skills” include dealing with complexity, communication, data analysis, and problem-solving skills, which remain transportable across all careers. 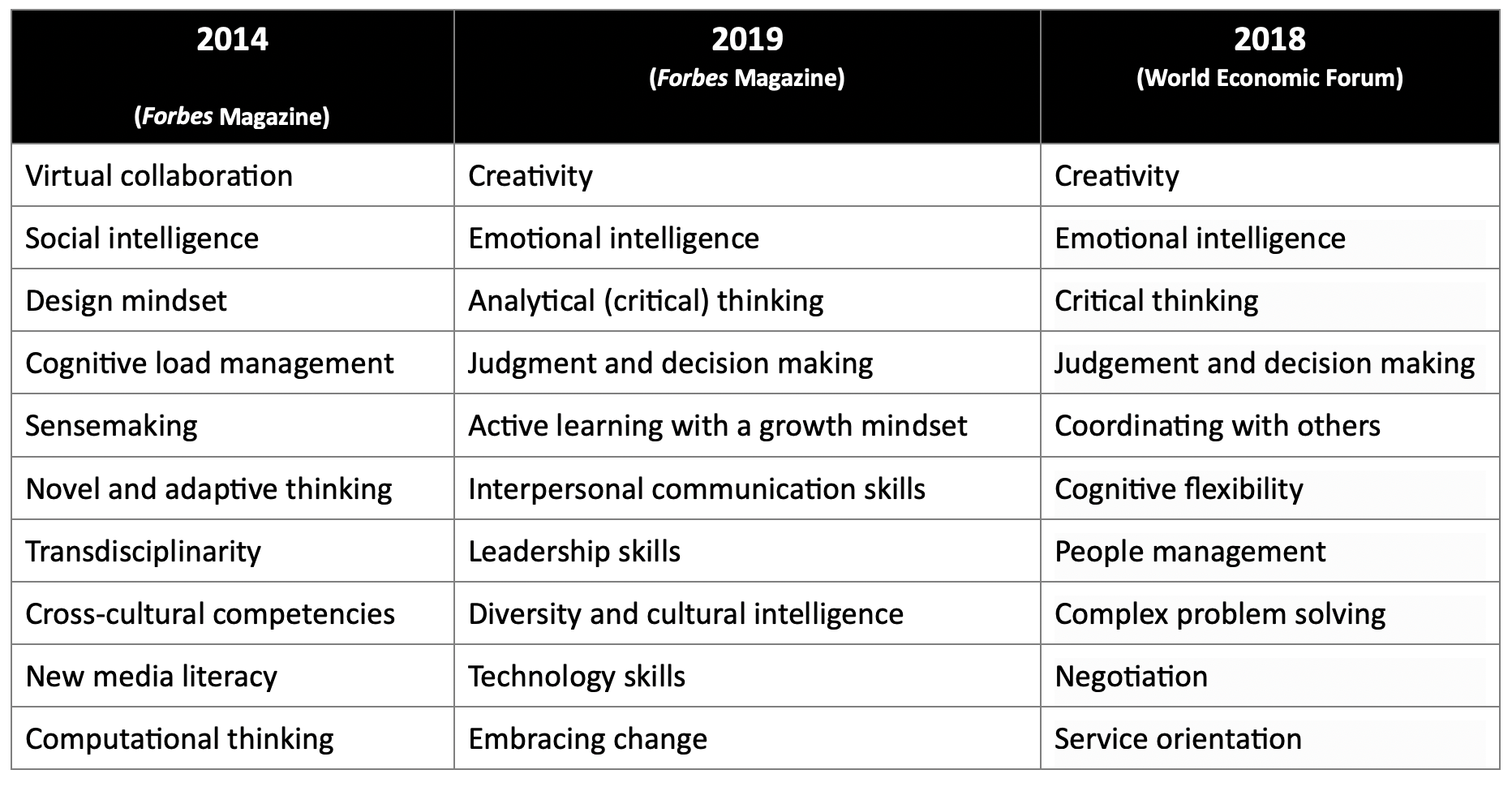 Figure 2 shows a small sampling of studies that have investigated the “10 required skills to succeed.” The absence of job-specific knowledge and skills across all three studies is glaring. A comparison by Forbes magazine in two reports, five years apart, reveals almost entirely different lists, more than merely a change in the popular vernacular. Interestingly, the 2018 list from the World Economic Forum compared with the Forbes 2019 report only has four similar essential skills: creativity, emotional intelligence, analytical/critical thinking, and judgment and decision-making.

Figure 2: List of required skills in “the next decade” 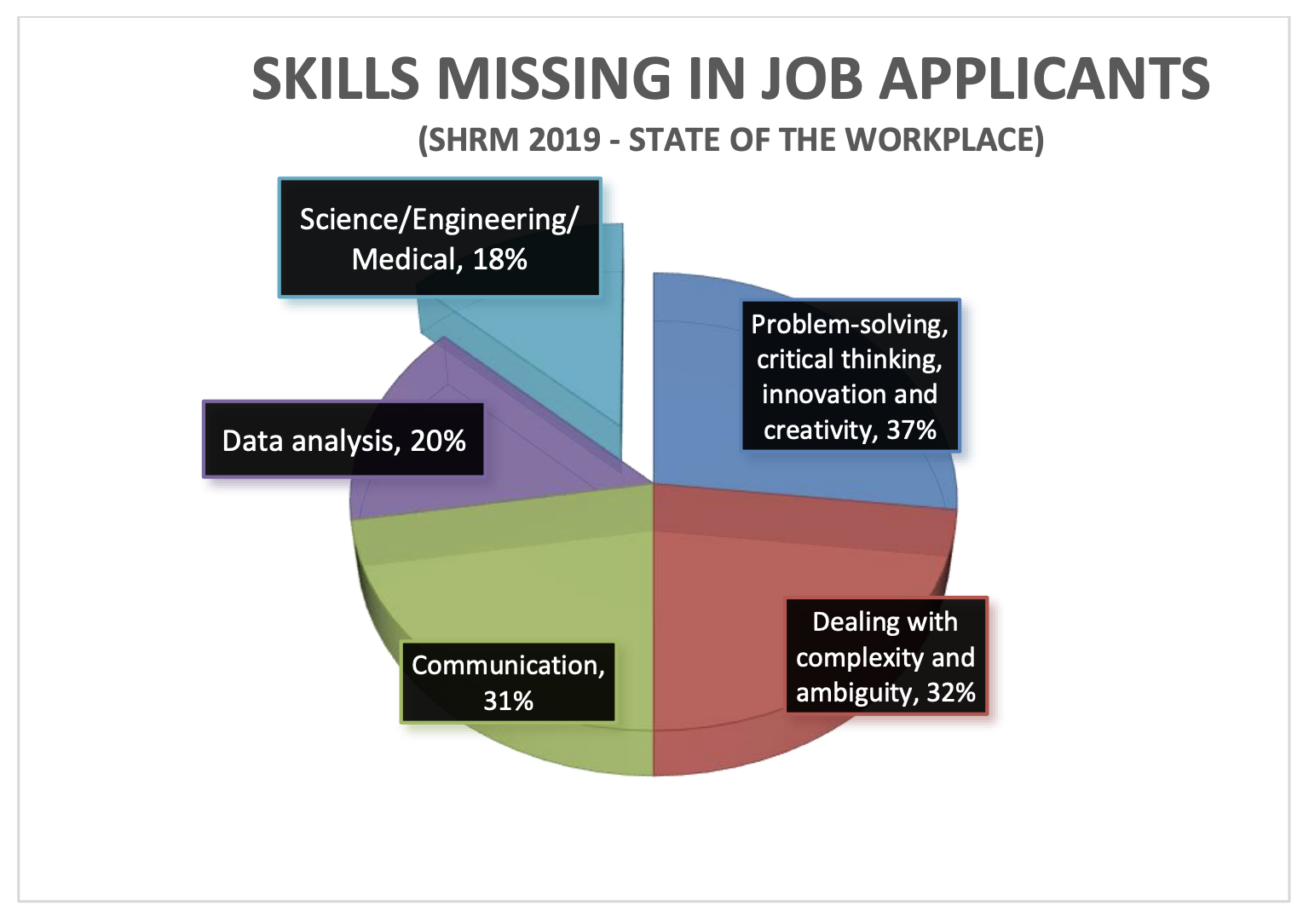 At the management level, with emphasis on operations and tactics, a deeper understanding of various fields involved in the operation of the enterprise is needed. Many master’s degrees in management and leadership have proven impactful in preparing managers with the minimum requirement of the job. Leaders, however, face more complex tasks. They need to be prepared for what has not yet occurred and is unthinkable. It is a forgone conclusion that few if any leaders, in institutions of higher education or other endeavors, had the foresight or the strategy to deal with a phenomenon like the COVID-19 pandemic. The question is whether graduate education prepares a leader for the unexpected “game changing” challenges?

Leaders require knowledge and abilities to learn a new complex and intricate subject in a short time. They need to become fluent to participate in operational and tactical matters, thoroughly understand the new science and its research, its interpretations, and its applications. We are not suggesting that in light of the COVID-19 crisis successful leaders need to become expert medical doctors; rather, to have the ability to learn at some level of proficiency how to be able to knowledgably rely on experts for information, yet have the insight and wisdom to orchestrate the larger picture. In other words, leaders are challenged more and more to be the conductor of the orchestra with the agility to learn new songs while understanding each instrument without the expertise to play it.

Today’s leaders need to be scholars of knowledge while also being adept at the practices of their field. They need to be grounded in research, manage and design their own learning, and translate that data and learning into practical steps for their enterprise. These complex, deep, and advanced abilities are harnessed and nurtured at the highest rungs of graduate education—scholar-practitioner based doctorate degrees in organizational leadership.

Fortunately, there is an abundance of doctoral programs in leadership that are offered mainly through schools of education. These degrees, unlike schools of business, put a great deal more emphasis on the people and learning side of leadership rather than simply the profit motive. These Doctor of Education degrees (Ed.D.) must have a broader organizational focus to them than a narrower educational leadership. The ideal Ed.D. program would emphasize a curriculum based on leadership and change, policy as an instrument of leadership, research, analysis and synthesis, and a global perspective.

The final issue becomes: Should aspiring or practicing leaders pursue practitioner degrees such as an Ed.D., or a theoretician’s degree in leadership such as a Ph.D.? Ph.D. programs emphasize research and analysis skills beyond what Ed.D. programs do. For leaders, who as part of their career portfolio are also interested in full-time teaching, joining advocacy organizations, or even complex consulting, the additional expertise in research prowess will be an asset. However, in selection of these programs one needs to pay close attention that the research commitment does not overshadow the practical application of leadership and change. Ph.D. programs often tend to do that. There are a handful of Executive Ph.D. programs in the marketplace that bridge the two worlds. There are also a few programs that offer the option of starting in a core doctoral program and down the line change lanes or do both as the learner’s career needs evolve. Such flexibility for doctoral programs is very much in tune with career demands of leaders in a world of constant irrelevance and obsolescence.

How to Get a Breakthrough in Ukraine

The Case Against Incrementalism

Ambition, Insecurity, and the Perils of Independence

A Long Way From Nuclear Fusion

What Governments Get Wrong About Funding Clean Energy