The Staggering Cost of an Unscientific Response to the Pandemic

At the outset of the COVID-19 pandemic in 2020, Vivian Balakrishnan, the foreign minister of Singapore, predicted that the novel coronavirus was going to pose an “acid test of every single country’s quality of health care, standard of governance, and social capital.” His observations turned out to be prescient; countries in Southeast Asia, including Singapore, escaped the worst of the pandemic by relying on their strengths in these three areas. By contrast, nearby India has failed on all three counts as it contends with an overwhelming, devastating second wave of the virus.

New case totals have dipped from their peak of over 400,000 in early May, but the scale of the crisis in India is still staggering. Official figures of COVID-19 cases and deaths in India are vast underestimates: the government itself suggests that reported cases reflect only one in 25 to 30 actual infections. By that metric, India may have had as many as 700 million cases even though it has reported only 26 million cases. The number of COVID-19 deaths is likely four times the official figure, reaching upward of roughly 1.2 million—by far the highest total in the world.

India had many disadvantages going into the pandemic. It has what can at best be described as a weak health system because of decades of underinvestment. Indians are more likely than other populations to have undetected hypertension or diabetes, both of which make severe cases of COVID-19 more likely. Indian health-care facilities are prone to high rates of secondary bacterial infections, which are lethal to many COVID-19 patients. And authorities have not always adhered to international guidelines and evidence on the treatment of COVID-19, often causing as much damage to patients as the virus itself.

The current predicament demands international attention. Other countries must help India comprehensively control COVID-19 and ensure that further dangerous variants don’t emerge. COVID-19 vaccines will be crucial, as the off-ramp from this pandemic for India, as for other countries, is to vaccinate a significant proportion of its population.

When historians reflect on India’s experience of COVID-19, they will puzzle over the contrast between the first wave of the virus that struck in 2020 and the far worse second wave that descended on the country a year later. The first wave did not produce the nightmare scenarios that many experts had envisioned, thanks in large part to a swift and hard national lockdown in March 2020. That lockdown was implemented with little warning and threw millions of lives into chaos, but it was nevertheless a public health success, saving the country from extremely high numbers of COVID-19 cases. The lockdown slowed transmission and allowed hospitals and other medical facilities to deal with the outbreak without being overwhelmed, although the system was severely tested in parts of the country.

But success bred complacency. With fewer than 10,000 reported daily cases nationwide this past January, the country’s leadership claimed victory. The government encouraged large election rallies as well as the Kumbh Mela, a Hindu mass-bathing event that was brought forward by a year. These events may have helped the transmission of the virus, but the real damage they caused was in signaling to the public that mingling in large gatherings without masks was now perfectly acceptable. Indians began to stop taking precautions. Confused government messaging helped precipitate the ferocious return of the virus.

The government’s scattershot reliance on scientific expertise in responding to the pandemic is hugely to blame for the current crisis. As case numbers ticked up, authorities were more interested in managing public relations than in correctly assessing caseloads and mortality rates. Some states actively discouraged testing to give the perception that case numbers were low; authorities also attributed many deaths to comorbidities rather than to COVID-19. A better understanding of the scale of the threat would have allowed Indians to remain more vigilant and protect themselves. Officials should have remembered the lessons of the HIV/AIDS crisis: countries such as India, Thailand, and Uganda that were upfront in disclosing their HIV case numbers were able to get their populations to adopt condoms and reduce risky sexual activity; countries that obfuscated those numbers, such as Botswana and South Africa, fared much worse.

The health system also failed on several fronts. Health officials and hospitals made few preparations to boost critical-care bed capacity or build up reserves of necessary medications and equipment to meet the inevitable rise in COVID-19 cases. A shortage of medical oxygen in cities and rural areas has killed many Indians. The scenes from crowded crematoriums and media reports of thousands dying for lack of the most essential of health resources have shocked the world. It was clear from the outset of the pandemic that it was essential to provide afflicted patients medical oxygen. But again, authorities failed to procure sufficient numbers of oxygen concentrators and cylinders in advance. Our own initiative at OxygenForIndia.org is one of a number of civic efforts to get oxygen to patients in need.

To compound the problem, nearly 10,000 people who have recently recovered from COVID-19 have come down with a rare and lethal fungal infection, known as mucormycosis. The source of this “black fungus” might be the poor infection control practices in Indian health-care settings or perhaps the irrational prescribing of steroids early in a patient’s treatment for COVID-19.

The overuse of various kinds of dubious medicines and treatments for COVID-19 is emblematic of the government’s slipshod response to the pandemic. Doctors typically hand a COVID-19 patient a long list of recommended medications and supplements whose efficacy in tackling the disease is not supported by clinical trials or scientific evidence. The Ministry of Health and Family Welfare has consistently endorsed the use of the drug hydroxychloroquine to fend off the disease, even though the drug is not known to work against viral pathogens. The government has also endorsed the use of the drug ivermectin, an unproven treatment for COVID-19. Plasma therapy is extremely expensive and demonstrably ineffective in treating COVID-19, but hospitals insist on administering it. These drugs and treatments remain in use and high demand because the government’s medical leadership at one time or another recommended them.

The Indian government has much to answer for: it did not adopt an adequately science-led approach to the pandemic, and the result has been poor preparation and the promotion of irrational medicines. But global institutions and the rest of the world also bear some responsibility for India’s dire situation. The World Health Organization was late in declaring COVID-19 a public health emergency, ineffective at corralling global cooperation in fighting the pandemic, behind the curve in stressing the importance of masks and other preventive measures, and reluctant to identify the origins of the pandemic in China. In the Indian context, the WHO has been an uncritical cheerleader for Indian government actions rather than a technical adviser that might help guide a science-driven response. The global health body could have brought critical attention to the unscientific character of India’s COVID-19 treatment guidelines. But local WHO offices are beholden to influential national governments and are therefore reluctant to be honest brokers and to criticize bad public health policy.

Perhaps the most galling misstep of India’s handling of the pandemic so far is its failure to sufficiently plan for vaccinating its population. India is known as the world’s largest producer of vaccines, but it didn’t make the necessary investments in expanding vaccine manufacturing capacity in 2020. Moreover, while other governments struck deals with pharmaceutical companies in late 2020 to procure sufficient doses for their populations, India waited until January. By then, the main Indian vaccine manufacturer, the Serum Institute of India, had already entered into commercial agreements to sell its vaccine supply to other countries and to the COVAX Facility (a global effort to supply vaccines to low- and medium-income countries).

By the time India decided to purchase vaccines for its own population, there was simply not enough supply available even from Indian companies. Only three percent of Indians are fully vaccinated now (nearly 40 percent of Americans are). An unvaccinated population allows the disease to spread more rapidly and for the emergence of variants, including some that are potentially more transmissible and lethal. Vaccine supply constraints will ease somewhat later this summer when additional production capacity comes online, but the early failure to plan and prepare for vaccine production has hampered not just India’s efforts to control COVID-19 but those of many other low- and middle-income countries that depend on India for affordable vaccines.

The most urgent task for India, and for many other countries still in the grip of the pandemic, is ramping up vaccinations. One immediate recourse would be for countries such as the United States to ease the supply constraints on vaccines by boosting the production of messenger RNA (mRNA) vaccines and supplying them to India and other countries. The mRNA vaccines have proved to be more robust in protecting against newly emergent strains, and their production can be scaled up much more rapidly than that of more conventional vaccines, such as those made by Indian manufacturers. This increase in supply could be made possible either by expanded production of mRNA vaccines in high-income countries or through a license-based technology transfer to Indian vaccine manufacturers.

The emergence of variants from countries that are largely unvaccinated poses a global threat. Given the large numbers of people who remain unvaccinated even in high-income countries, preventing the development of coronavirus variants remains in everybody’s interest. What happens in India does not stay in India. Already, the highly infectious B.1.617 and B.1.617.2 strains that are believed to have emerged from the Indian subcontinent pose a threat to people in dozens of countries. The sooner India exits COVID-19, the faster the world will escape, too. 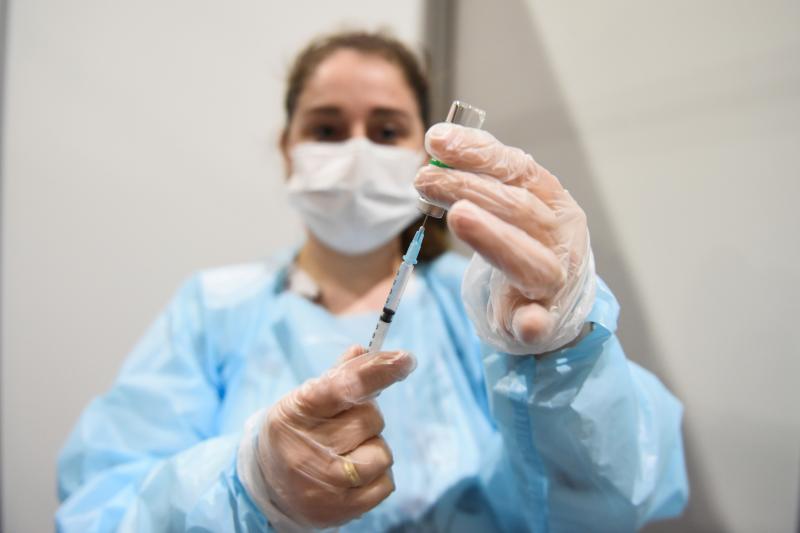 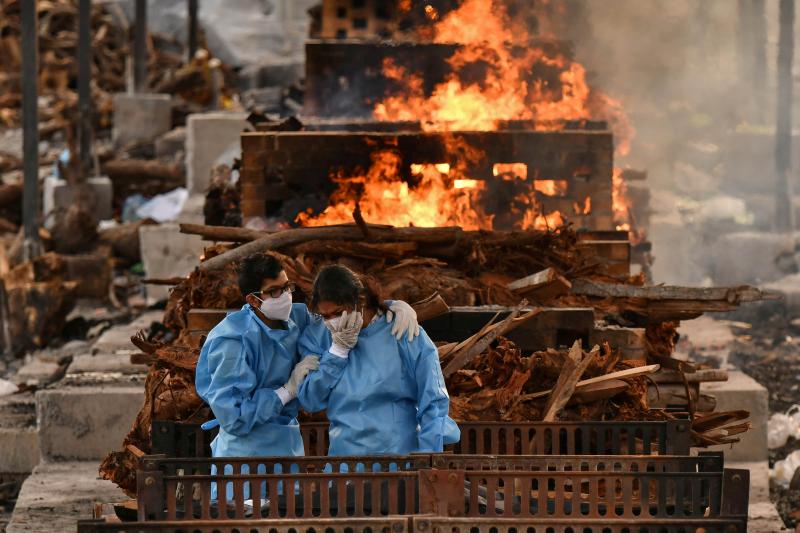 Why America Must Do More to Help India