How to Pull Ethiopia Back From the Brink

Washington Must Help End the War

Ethiopian Prime Minister Abiy Ahmed came to power at a tumultuous moment in 2018. Years of protests by the country’s largest ethnic group, the Oromo, had prompted the government to declare a state of emergency, and long-simmering ethnic and regional tensions threatened to break apart the ruling coalition, known as the Ethiopian People’s Revolutionary Democratic Front (EPRDF). An Oromo and a self-proclaimed reformer, Abiy promised sweeping economic and political changes and set out to make peace with Ethiopia’s archenemy, Eritrea. The United States welcomed these early initiatives, embracing the prime minister’s reform agenda and lavishing promises of aid on his government. When in 2019 Abiy won the Nobel Peace Prize, it was taken as proof in some quarters that Ethiopia had entered a new era of peace and democracy.

Fast-forward three years and Ethiopia is mired in civil war. Its northern Tigray region is on the brink of humanitarian disaster, and Ethiopian troops, their allies, and rebel forces all stand accused of grave human rights abuses. Insurgents affiliated with the Tigrayan People’s Liberation Front (TPLF), which dominated the EPRDF prior to Abiy’s premiership, control much of Tigray and the neighboring region of Amhara. And together with rebels from Oromia, they have threatened to march on the capital of Addis Ababa and topple Abiy’s government.

In light of this swift reversal of fortunes, the United States has condemned Ethiopia’s conduct in the war, suspended most security assistance to the country, and authorized sanctions against officials who Washington believes are fanning the flames of conflict in Tigray. At the same time, the administration of U.S. President Joe Biden has tried to jump-start a peace process, dispatching U.S. Special Envoy for the Horn of Africa Jeffrey Feltman to Ethiopia to pressure the parties toward compromise. The outlines of a deal seem clear: an immediate and unconditional cease-fire, unhindered humanitarian access, and an all-inclusive national dialogue. None of the parties to the conflict have accepted these terms, however, and the United States has limited leverage over them. All sides now see the conflict in existential terms, and the country has been polarized by news of atrocities and narratives of victimization.

Still, there may be a window for diplomacy to succeed. Although troops on the battlefield and leaders in Ethiopia—and not diplomats from abroad—will ultimately determine the outcome of the conflict, the United States can help lay the groundwork for peace. In particular, Washington can help facilitate talks between parties that do not trust one another; offer technical assistance where it is needed, including to monitor an eventual cease-fire; and provide guidance on the potential sequencing of a future peace process that could help it stay on track.

Ethiopia’s descent into civil strife was not as abrupt as it may seem in retrospect. Along with the first stirrings of reform, Abiy’s early years saw a rapid escalation of political violence: assassinations, armed clashes between regional security forces, deadly attacks by ethnic militias, a significant counterinsurgency campaign in parts of Oromia, and massive internal displacement all took place before the outbreak of civil war.

Until a little more than a year ago, however, Tigray remained stable under the domination of the still-powerful TPLF. Relations between regional Tigrayan officials and Abiy’s government steadily worsened in 2020 as both sides engaged in provocative brinkmanship. And in November 2020, as Ethiopian forces and those of their allies amassed on the borders of Tigray, the TPLF launched what it called a “preemptive strike” against the Ethiopian military’s Northern Command. Addis Ababa quickly labeled the TPLF a terrorist group and stated its intention to destroy the party. What followed was a war of unbounded violence, featuring deliberate starvation, sexual violence, systematic looting, and attacks on civilians, including refugees.

Ethiopia’s descent into civil strife was not as abrupt as it may seem in retrospect.

Initially, Abiy’s forces appeared to have the upper hand. They captured Mekelle, the capital of Tigray, and other towns in the region and forced the TPLF to withdraw to the mountains. But in June 2021, the Tigrayan rebels, reconstituted as the Tigray Defense Forces, launched a counteroffensive and recaptured Mekelle. In November, the TDF advanced to the south, deep into Amhara and close to Dessie, a strategic town on the main highway to Addis Ababa. Panic spread through the capital, and Abiy declared a state of emergency, ordered the mass arrests of Tigrayans, and promised to go to the warfront to personally lead Ethiopian troops.

Many have framed peacemaking in Ethiopia as primarily a matter of getting the TDF and Ethiopian government to agree to a cease-fire, to allow humanitarian access to regions affected by the war, and ultimately to undertake an inclusive national dialogue. But the conflict has been multilateral from the start and has become more so over time. In addition to the TDF and the Ethiopian government, forces from Eritrea and Amhara have been embroiled in the war, as have various local militias engaged in communal violence and ethnic cleansing. Although all sides have committed atrocities, human rights watchdogs have consistently singled out the abuses of Eritrean and Ethiopian troops and of regional security forces from Amhara.

Most recently, the rebel Oromo Liberation Army has dramatically altered the course of the conflict. The OLA has been fighting the Ethiopian government since 2018, but its operations have been mostly confined to western Oromia. In August, however, the OLA and the TDF signed an agreement to cooperate in their struggle against Abiy’s government. The two movements have a history of enmity and very different goals beyond removing Abiy. But their alliance, however brief it may be, could present a mortal threat to the government in Addis Ababa. The OLA has already begun to move east into southern Amhara, reportedly entering the town of Kemissie, just south of TDF positions. It is unclear if the rebel groups plan to march on the capital or if they would succeed if they tried. Even if they stay put, however, they will be in a position to threaten the highway that connects Addis Ababa to the port of Djibouti—a vital lifeline for landlocked Ethiopia—and so may be able to dictate the terms of any peace settlement.

A PATH TO PEACE

In the wake of this sudden escalation, the United States has intensified its diplomatic efforts. Last week, U.S. Secretary of State Antony Blinken traveled to Kenya—his first trip to an African country—to discuss Ethiopia, among other regional security issues, with President Uhuru Kenyatta, who is also involved in peacemaking efforts. Blinken repeated calls for accountability and thanked Kenyatta for his “engagement,” but there was little apparent progress. At the same time, Feltman and his counterpart from the African Union, former Nigerian President Olusegun Obasanjo, continue to carry out shuttle diplomacy, searching for ways to stop the killing.

Yet there is still considerable daylight among the various parties. Earlier this month, Ethiopia’s Ministry of Foreign Affairs announced a set of conditions for a cease-fire, including the total withdrawal of the TDF from Amhara and the neighboring region of Afar—steps that the TDF is unlikely to take. For its part, the TDF has demanded an end to the humanitarian blockade before it will agree to a cessation of hostilities—a condition that Addis Ababa has brushed aside by blaming the TDF, among other sources of insecurity, for impeding food distribution in Tigray. Further complicating matters is the fact that neither the Eritrean troops nor the forces from Amhara have been included in the early discussions about a cease-fire.

Although the prospects for peace remain slim, there is much the United States can do to help move the various parties closer to an agreement. The most urgent priority for Washington is a cessation of hostilities. Cease-fires are most effective when they are negotiated (rather than unilaterally proclaimed) and when they include detailed provisions on geographic scope, monitoring, exchange of prisoners, and the resumption of communications and transportation links. The United States should push for as much specificity as possible in a cease-fire agreement and for all parties to participate in it. Washington might also consider a cease-fire that would be implemented in stages, so that the return of rival forces to their barracks follows other, less fraught steps. Washington and its partners should offer technical assistance to the conflicting parties, especially when it comes to monitoring the cease-fire.

There is much the United States can do to help move the various parties closer to an agreement.

The United States should also seek to shape the peace talks. The question of who participates in negotiations is often one of the most difficult to answer, since participation confers a degree of legitimacy and those who are left out sometimes become spoilers. Including the Oromo opposition in peace talks would be extremely contentious, but the OLA is clearly a relevant military actor, and imprisoned Oromo opposition leaders such as Bekele Gerba and Jawar Mohammed speak for important constituencies. If these parties are excluded from either a cease-fire agreement or subsequent negotiations on a political settlement, many Oromos are likely to conclude that armed struggle is the only way to be heard. The United States should therefore recommend that Oromo leaders be invited to join the talks.

Washington might also have a role to play in determining the sequencing of the various components of the peace process. Breaking difficult steps, such as putting in place a comprehensive cease-fire, into smaller, discrete ones often helps the process advance. For instance, allowing unrestricted humanitarian access to address the famine in Tigray could help build momentum toward an inclusive national dialogue. Beyond advancing the peace process, ending the humanitarian blockade is a fundamental moral necessity. Keeping it in place is a violation of international law.

Ultimately, the course of the civil war in Ethiopia will be determined by Ethiopians themselves. But Washington, the African Union, and the broader international community can help with advice and assistance—and by using their limited leverage over the parties to push them toward peace. Consistent engagement and clear statements that emphasize the growing risk to Ethiopia’s unity and the need for accountability will help underscore the immense costs to the belligerents of continuing along their current path. The United States remains a major bilateral donor to Ethiopia. And although new actors such as China, the Gulf states, and Turkey have grown increasingly important in the Horn of Africa, Washington remains an indispensable voice in multilateral organizations such as the World Bank and the United Nations whose assistance Addis Ababa will desperately need for postwar reconstruction. Washington can and should use this leverage to push the parties toward an alternative to war. 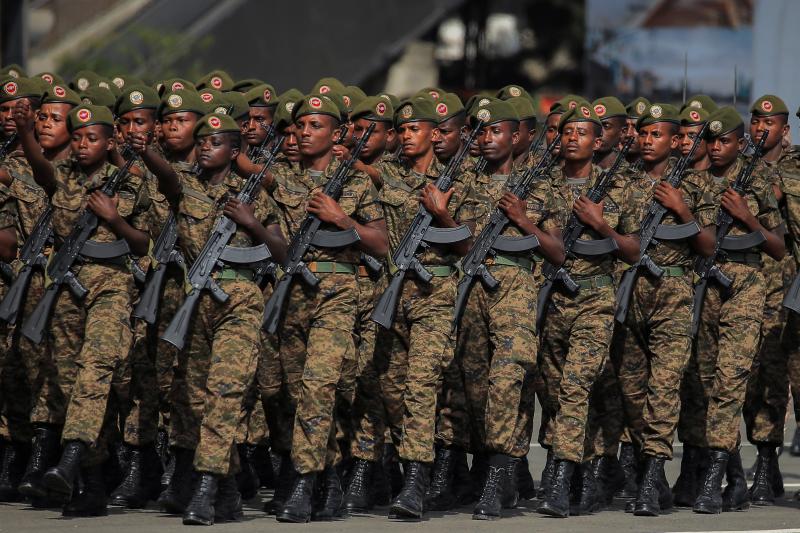 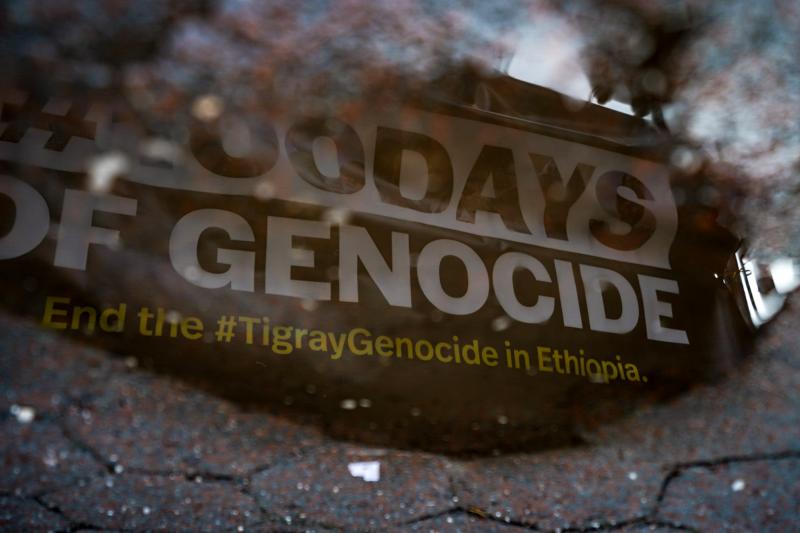