With each passing day, the United States and Iran draw each other deeper into conflict. So far, they have stopped short of war. But the likelihood of an armed conflict increases with every additional provocation, whether it is an attack on a civilian tanker ship or another round of sanctions. Both countries, with their all-or-nothing strategies, are to blame. President Donald Trump’s administration has pursued a “maximum pressure” campaign against Iran built on suffocating economic sanctions and a de facto oil and gas embargo. Iran has pursued a maximum resistance strategy, escalating into attacks on shipping lanes, downing a U.S. drone over the Persian Gulf, and rejecting out of hand all opportunities for de-escalatory talks with Washington. With both states unwilling to back down, the march toward war continues.

A DEEPER SOURCE OF CONFLICT

That relations could have deteriorated to this degree is remarkable. Only four years ago, Washington and Tehran signed a historic multilateral agreement that curtailed Iran’s nuclear enrichment program in exchange for U.S. sanctions relief. The deal didn’t end the mistrust between the two countries, nor did it solve long-standing disagreements about Iran’s foreign policy in the Middle East, but it created a much-needed mechanism for diplomatic engagement, which the deal’s proponents saw as necessary to avoid a war.

Trump was an outspoken critic of the deal on the campaign trail, and upon taking office, he began to ratchet up pressure on Tehran. For all its faults, the Trump administration at least seemed to grasp a crucial fact: although Iran’s nuclear program had become a focal point of U.S.-Iranian tensions, it was never the real source of acrimony between the two countries. The roots of those tensions lay deeper—in Iran’s support for militant groups at war with Israel, such as Hamas, Palestinian Islamic Jihad, and Hezbollah in Lebanon, and in its ties to enemies of the United States’ Gulf allies, such as the Houthis in Yemen. No less consequential was Iran’s support for Iraqi militias that killed hundreds of U.S. military personnel at the height of the Iraq war and that continue to threaten U.S. troops there.

Hoping to induce a change in the Islamic Republic’s behavior, Trump withdrew from the deal in 2018 and embarked on a sanctions-based “maximum pressure” campaign. His administration presented Tehran with a list of 12 demands, most of which concerned Iran’s regional activities, with the remainder relating to the country’s nuclear and ballistic missile programs. Taken together, Trump’s conditions essentially asked Iran to abandon its grand strategy and surrender its most valuable military deterrents. In exchange, the United States promised not only to lift sanctions on Iran but also to help restore its economy and normalize diplomatic relations.

The Islamic Republic, unsurprisingly, rejected the demands outright. Tehran then looked to Europe, Russia, and China, hoping that some or all of these actors would pressure the Trump administration to walk back its demands or else provide a means of bypassing the U.S. sanctions regime. Yet Iran had apparently neither amassed enough clout nor earned sufficient goodwill to secure foreign backing against the United States. The regime was effectively alone.

THE LOGIC OF ESCALATION

With U.S. sanctions beginning to take their toll, Iran needed to find a way out of this bind. It had three options: It could give in to U.S. demands or at least appease Washington by seeking dialogue. It could tough it out and hope that Trump would lose his 2020 reelection bid. Or it could push back and raise the stakes by showing it was prepared to escalate.

Judging by its recent behavior, the Islamic Republic seems to have chosen the third option. Iran is widely believed to have been responsible for an attack against commercial ships in the Gulf of Oman on May 12. U.S. officials had repeatedly warned that Iran might be planning such a strike, and many observers anticipated that the incident would trigger a U.S. military response. Instead of escalating, however, the United States responded with calls for dialogue without preconditions.

Trump's policies have led the United States to the brink of an elective war with Iran.

Assuming that Iran was indeed behind the attack, the operation was a clear victory for Tehran. By mounting a costly but nonlethal attack on civilian shipping lanes, it had shifted U.S. policy from escalation to dialogue. Trump followed through by asking Japanese Prime Minister Shinzo Abe to deliver a letter to Iran’s supreme leader, Ali Khamenei, expressing his desire for talks. But when Abe met with Khamenei in Tehran on June 13, both the letter and the offer for dialogue were summarily dismissed. That same day, two more oil tankers, including a Japanese-flagged vessel, were attacked in the Gulf of Oman. The United States again pegged Iran as the probable culprit, and this time the U.S. Navy provided surveillance video showing Iran’s Islamic Revolutionary Guard Corps (IRGC) personnel onboard a patrol craft removing a suspected limpet mine from the hull of one of the tankers before speeding off toward the Iranian port at Bandar-e-Jask.

Iran had engineered an opportunity for dialogue and promptly squandered it. Even if the U.S. overture was insincere, as Iran’s leaders probably assumed, Iran never cared to test it. Appearing open to de-escalatory dialogue would have won Iran leverage with the United States and sympathy from the international community. Instead, Khamenei flippantly rejected the off-ramp he’d been offered, embarrassing the prime minister of a neutral foreign power and risking open war with the United States by attacking civilian targets in the Gulf of Oman.

Such behavior is counterproductive and dangerous, but not altogether unexpected, given the tight boundaries Khamenei has imposed for how to engage with the United States: Iran’s leader has demanded a complete reversal of the Trump administration’s policy but refuses to engage in talks while sanctions are still in place. Unwilling to suffer through sanctions or seek compromise, Iran has only one remaining option: to escalate and challenge the Trump administration’s resolve.

In keeping with this logic, Iran proceeded on June 20 to shoot down a U.S. Navy surveillance drone over international waters. (Iran claims the drone was over Iranian territorial waters.) The choice of an unmanned target likely signaled Tehran’s desire to escalate within limits, but its action still forced an American response. Trump reportedly ordered a series of U.S. strikes against Iranian missile and radar positions but halted the operation at the last minute. Instead, the United States claimed to have carried out limited cyberattacks targeting command-and-control nodes for Iran’s missile systems. The Trump administration also announced additional sanctions on a massive financial conglomeration controlled by Khamenei and on a host of IRGC navy commanders—and warned of possible future sanctions against Iranian Foreign Minister Mohammad Javad Zarif.

Trump’s response shows that Washington has become just as boxed in as Tehran. The president’s policies have led the United States to the brink of an elective war with Iran, and his administration’s behavior—especially the threat of sanctions against Iran’s top diplomat—has undercut the sincerity of his repeated calls for talks. Sanctions seem to be the only tool the administration is comfortable with, but at this point new sanctions are almost ceremonial, since the most economically damaging ones have long ago been enacted. Even so, they make negotiations more difficult: following the latest round of sanctions, Iranian officials declared any window for diplomacy closed for good—an admittedly rich declaration given Iran’s previous refusal to engage in talks.

Neither side seems to want a war, but both are steadily moving in that direction.

Over the last week, the rhetoric on both sides has sunk to the level of schoolyard taunts. Iranian President Hassan Rouhani snapped that “The White House has become stricken with mental disability.” Trump, perhaps responding to some news reports that rendered Rouhani’s Persian more crudely as “retarded,” shot back with what seemed like a new U.S. redline, tweeting, “Any attack by Iran on anything American will be met with great and overwhelming force. In some areas, overwhelming will mean obliteration.”

What remains are two states unwilling to compromise, unable to talk, and too proud to back down. Neither side seems to want a war, but both are steadily moving in that direction, boxed in by their own maximalist policies and intransigence. But peace will not come through attacking ships or shooting slow planes out of the sky. A lasting solution to the crisis requires compromise and an end to Iran’s destabilizing foreign policy in the region. These days, it seems less and less likely that Iran will follow this path—but it’s the one the Iranian people deserve. 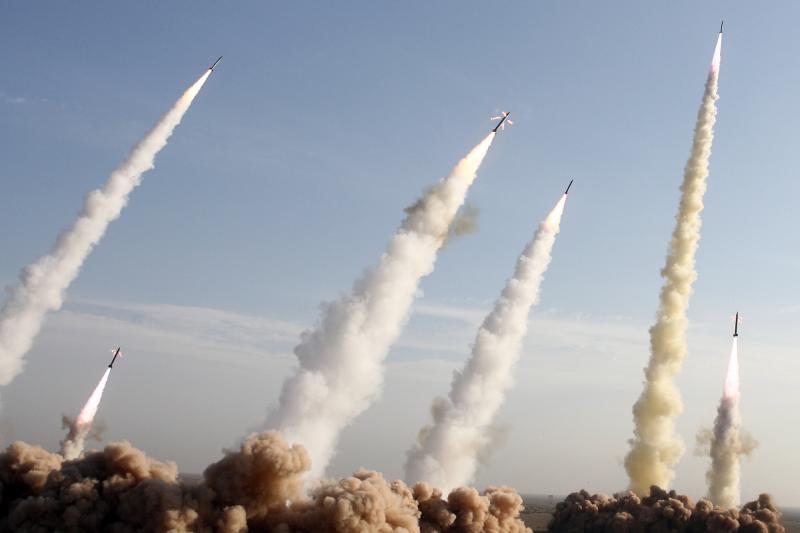 A Path to War With Iran

How Washington’s Escalation Could Lead to Unintended Catastrophe