Since the mid-1990s, things had seemed to be changing for the better for sexual minorities in Poland. The first openly gay and transgender politicians were elected to office; mainstream films and novels began to represent LGBTQ characters in a positive light; and in 2001, the country’s first pride march was held in Warsaw, after which these marches spread into provincial cities. In an opinion poll conducted in February 2019, more than 50 percent of Poles expressed support for same-sex civil unions. When I left Poland 15 years ago, such developments had still been unthinkable. As an émigré, I watched my country from across the Atlantic with surprised appreciation.

But even as the Polish LGBTQ community was celebrating the February 2019 poll results, the tide was turning back against them. Their situation had been worsening, with increasing inevitability, since Poland’s current right-wing government came into power in 2015. Since this spring, anti-LGBTQ sentiments have become especially virulent and exceptional political energy has gone into fomenting them. In March, Jaroslaw Kaczynski, the leader of the ruling Law and Justice party (PiS), publicly opposed the World Health Organization’s sexual education guidelines, accusing them of “sexualizing” children and “altering children’s natural identity.” And since March, 31 right-leaning local governments (and counting) have declared their counties and cities “LGBTQ-free.” Churches have been distributing leaflets accusing gays of pedophilia. Prominent pro-life activist Kaja Godek accused gay people of “adopting children to rape and molest them.” In late July, Gazeta Polska, a right-wing daily, planned to include “LGBT-free zone” stickers with its Sunday edition, and a court order was needed to cancel their printing. Last week, Archbishop Marek Jedraszewski described LGBTQ communities as a “rainbow plague.”

This constellation of anti-LGBTQ forces, including the Catholic Church, right-wing activists and media, and the national and local governments, has riled up its constituencies and is apparently persuading some swing voters. The campaign has already had frightening and even tragic consequences. At the end of July, another opinion poll showed Poles’ support for same-sex unions to have dropped back to 44 percent. On July 25, the journalist Przemyslaw Witkowski was brutally assaulted in Wroclaw for voicing his objection to homophobic graffiti he saw in the street. When Bialystok, a midsize provincial capital, held its first pride march on July 20, an extremist group attacked the parade, throwing rocks and bottles at the marchers and wounding several people. Ninety-two alleged perpetrators have now been charged—and yet government and church officials have been slow to condemn the attack. A Catholic magazine that also receives government funding published an op-ed defending their violence as “just.” The current minister of national education, Dariusz Piontkowski, has gone on record proposing to ban pride marches altogether because of the extreme right-wing opposition they excite.

Poland’s culture has generally opened—especially in major cities—but behind this openness there has been little institutional change.

The convergence of awareness and discrimination reflects a deep rift between the cultural and legal status of the country’s sexual minorities. Polish liberals are partly to blame. While they were in power between 2007 and 2014, they treated queer populations as a group that still needed to prove its political relevance, indefinitely postponing most legislative reforms to protect them. By failing to make LGBTQ rights a priority, Polish liberals lost an opportunity to transform cultural advances into meaningful legal protections. The result is that Poland’s culture has generally opened—especially in major cities—but behind this openness there has been little institutional change. Now, the legacy of many years of activism is under serious threat.

THE RISE OF THE RIGHT

Poland’s political landscape currently tilts toward the forces of reaction. The European Union elections in May went largely to the PiS, standard-bearer of Poland’s extreme right, followed by the centrist Civic Platform. Gay activist Robert Biedron’s new leftist initiative, Wiosna (Spring), was the only party of these three to put sexual minority rights prominently on its agenda, and it won a disappointing three seats.

In Poland, the left and center have historically fared better in EU elections than in national ones, so May’s results boded ill for the opposition’s prospects in the national parliamentary elections scheduled for October. In the meantime, PiS seems to have interpreted the results of the EU elections as an endorsement of its increasing extremism. It will likely continue to fuel moral panic in an effort to drive its mostly Catholic, conservative voters back to the polls this fall.

PiS’s main collaborator in fanning these fires, the Polish Catholic Church, seeks in part to distract Poles from its child abuse scandals. For years, these scandals had been something of an open secret, known only locally and piecemeal. In May, the Polish filmmaker Tomasz Sekielski released a documentary titled Tell No One that brought the church’s recent history of sexual abuse into public consciousness with unprecedented empirical force. Sekielski filmed abuse survivors confronting their assaulters and documented church officials’ methodical resistance to bringing such cases to trial. The documentary went viral and sparked an official investigation.

PiS seems to have interpreted the results of the EU elections as an endorsement of its increasing extremism.

The film was profoundly embarrassing to the Polish episcopate and has intensified its fear of political disempowerment. Given its history of support for anticommunist movements and Pope John Paul II’s anti-Soviet stance during the Cold War, the Polish Catholic Church has long promoted itself as an advocate for the “right” kind of modernity as well as a protector of traditional moral values. On the strength of this supposed balance, the church won many political victories, including stringent abortion laws, state-sponsored religious education, and considerable tax breaks for itself. But especially since Poland joined the European Union in 2003, the Polish Catholic Church’s strong conflicts with EU secularism—over the definition of marriage, among other issues—have eroded its cosmopolitan image. An abuse scandal threatens to further undermine the church’s moral authority and its image as a vector of positive social change. Stoking suspicion of sexual minorities could serve as an obvious, if desperate, diversion strategy. The church may hope to send the message that even if some priests are to be feared, sexual minorities are to be feared more.

The achievements of queer activism that these recent developments threaten are real and long-standing, but fragile. Scholars and activists had worked for decades to raise awareness about LGBTQ communities in Poland. The country’s first two major LGBTQ organizations, Lambda Warsaw and the Campaign Against Homophobia, were founded in 1997 and 2001, respectively. The two groups have labored tirelessly to educate Polish society about Polish LGBTQ people and to draw attention to discrimination against them. In the country’s emergent gender studies departments, the first of which was founded in Warsaw in 1996, academics began to uncover the longer history of sexual minorities in Poland. The general public heard for the first time about underground queer life under communism—and contended with evidence that many of Poland’s cultural heroes, such as the poets Maria Konopnicka and Jan Lechon, the novelists Maria Dabrowska and Witold Gombrowicz, and the composer Karol Szymanowski, might have been sexual minorities themselves.

The wave of activism and research that took place from the mid-1990s to the mid-2010s has had real effects on public sentiment. These scholarly and activist efforts have also led to a few legal breakthroughs, such as a limited antidiscrimination bill passed in 2003. And the effects made their way into politics: in 2011, Anna Grodzka became the first transgender woman to be elected to parliament. Since 2014, Robert Biedron has gained prominence as a successful mayor and the head of a new leftist party. A few municipal governments, including those of Warsaw and Gdansk, have recently issued statements promising to support their LGBTQ populations, especially teens and the homeless.

For the most part, however, these political and legislative victories have been local and sporadic. Poland’s LGBTQ laws remain more conservative than those of almost any other EU country. Since 2003, the Polish parliament has discussed legalizing civil unions at least five times—but each time, the proposals have foundered for want of government support. Hate speech laws condemning homophobic utterances have failed to pass for similar reasons. In 2015, Polish President Andrzej Duda vetoed a modest transgender rights bill that would have drastically simplified the country’s procedures for people seeking gender transitions. Milo Mazurkiewicz, a 23-year-old trans activist, killed herself this past May in despair over legal and medical difficulties that the bill would have helped resolve. “I’ve had enough,” she wrote on Facebook before jumping off a Warsaw bridge. “I want to hear something other than ‘someday things will get better.’”

For decades, Polish queer people waited for the right moment to seek redress, and centrist governments prevaricated. By the time PiS came into power, ready to reverse any institutional support LGBTQ rights had been given, there was very little for it to undo: no civil unions, no hate speech laws, and barely functional gender transition procedures. Any of these much-needed measures would have provided Poland’s sexual minorities with a bulwark of protection.

Poland is not unique, either in the prevarication of its liberals or in the readiness of its extremists to use social minorities as scapegoats. But its experience demonstrates the limited efficacy of consciousness-raising without institutional change. As elections near, more Polish politicians—centrists as well as leftists—need to support LGBTQ rights as an intrinsic part of the democratic values they protect and inculcate. Otherwise, for all the liberal lip service in their favor, Poland’s sexual minorities will remain unprotected. 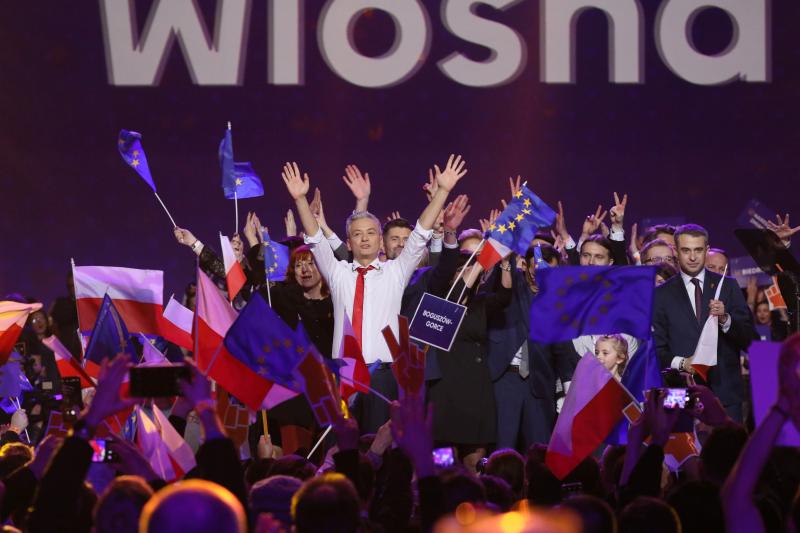 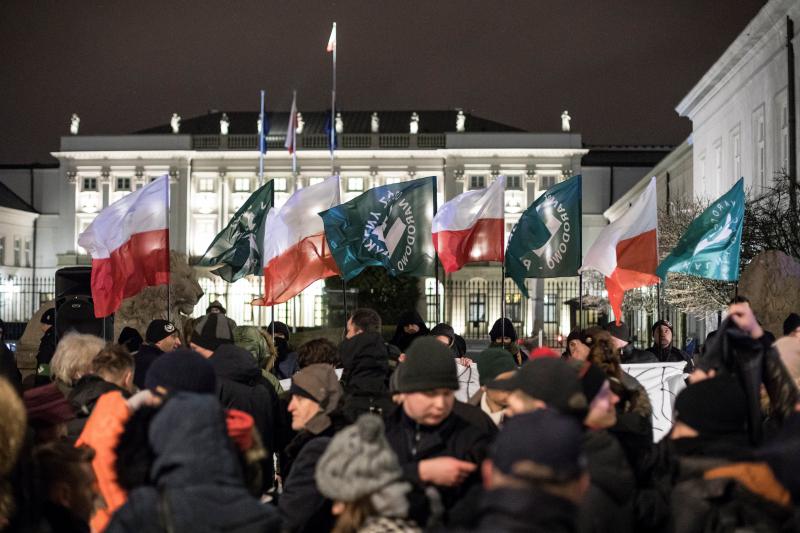 Poland's New Holocaust Law and the Politics of the Past