In the spring of 2011, watching the groundswell of dissent that eventually came to be known as the Arab Spring, commentators of various political stripes and nationalities expressed hope that the region would move toward democracy. Iran had experienced a similar moment two years earlier, when millions of citizens protested what they saw as the fraudulent reelection of hard-line President Mahmoud Ahmadinejad. But by 2011, Tehran had effectively crushed that movement. As a result, many Iranians watched the Arab Spring unfold with envy.

Syria, in particular, captured their imagination. Under the Assad family’s rule, Syria had been a crucial ally to the Islamic Republic and the country’s only real Arab partner. For that reason, many Iranians who opposed their own government cheered the anti-Assad protests that broke out in early 2011 and welcomed the prospect of Bashar al-Assad’s downfall. Officials in Tehran, by contrast, observed the situation in Syria with deep unease. Fearful that the friendly regime in Damascus would collapse, they committed significant resources to shoring up Assad, deepening Iran’s involvement as the uprising in Syria morphed into a vicious civil war.

To date, Tehran has spent an estimated $15 billion propping up Assad—even as the Iranian economy has crumbled under sanctions for the better part of the war. Additionally, the Islamic Republic is thought to have sent some 10,000 operatives, including combat troops, to Syria between 2011 and 2014. This number omits non-Iranian forces backed by Tehran, which The Wall Street Journal put at 130,000 in 2014. And by Tehran’s own admission, at least 2,100 Iranians had died in the conflict by 2017, including a number of high-ranking military commanders. Today, even as the war winds down, Iranian body bags continue to return home.

Iran’s costly intervention has been crucial to Assad’s survival. It has also profoundly affected Iran itself: the experience of fighting in Syria has changed the Iranian way of war, shifting Iranian tactics and forcing the country’s military to gain new capabilities, especially when it comes to cooperating with foreign militaries and training non-Iranian proxy forces.

These changes won’t be confined to Syria. As tensions rise between Washington and Tehran, the United States and its partners will begin to feel the effects of Iran’s military transformation. To get a sense of the playbook that Tehran might consult in any future conflict with the United States, Washington should pay close attention to what the Iranians have learned in Syria.

THE ROAD TO INTERVENTIONISM

Since the start of the twentieth century, Iran has seldom deployed troops outside its borders. In 1973–74, Shah Mohammad Reza sent several thousand soldiers and advisers to Oman to help Sultan Qaboos bin Said crush a rebellion. Later, under the newly established Islamic Republic, Iran fought an eight-year war against Saddam Hussein’s Iraq, in which hundreds of thousands of Iranian soldiers lost their lives but neither side could convincingly claim victory. Following the Iran-Iraq War, which ended in 1988, Tehran limited the scope of its foreign interventions to assistance and advice. The country lacked significant conventional military capabilities and sought plausible deniability whenever its actions could be construed as illegitimate or out-of-bounds.

At times, Iran launched airstrikes against nonstate actors outside its borders. Throughout the 1990s, for instance, the country targeted separatist Kurds and the Mujahideen-e Khalq, an opposition group that the Iranian leadership designated a terrorist organization. For the most part, however, Iran involved itself in foreign countries by training, equipping, and sharing intelligence with proxy forces—most notably, Hezbollah fighters in Lebanon.

When unrest began in Syria in the spring of 2011, Tehran followed its usual playbook. It sent technology, equipment, and weapons, as well as advisers who could draw on their own experience in crushing anti-regime protesters at home. But as Syria descended into all-out civil war, what Tehran had hoped would be a quick and relatively low-cost mission to stabilize the Syrian government turned into a quagmire—one that would force Iranian leaders and military planners to adapt if they wanted to prevent Assad from being replaced by a hostile regime.

In 2013, as opposition forces gained momentum and Western powers called for Assad to step down, the dictator unleashed chemical weapons and committed atrocities to strengthen his grip on power. In the wake of these attacks, Tehran began deploying its own combat troops to Syria as part of a more open and assertive approach. In addition to the paramilitary Islamic Revolutionary Guard Corps (IRGC), which Tehran normally dispatches to conduct its covert missions, the country deployed members of its conventional military as well as volunteer militias known as the Basij. At the same time, a number of Iran’s traditional nonstate partners, particularly Hezbollah and some Iraqi Shiite militias, also sent forces to Syria.

To augment these forces, Tehran recruited and deployed new militias composed of Pakistani and Afghan Shiites, some of whom were promised compensation and residency in Iran in exchange for joining the fight. (Iran also reportedly coerced Afghan refugees living within its borders to join these new groups.) IRGC commanders often visited the militias on the Syrian frontlines, helping to ensure direct channels of communication with and control over the fighters as they battled in support of the Assad government.

The greatest threat the United States faces from Iran lies in its hybrid warfare capabilities, which Tehran has honed over the last four decades and perfected in Syria.

Just as important, Tehran stopped trying to hide its involvement in Syria. After initially denying its covert operations there, as it typically does, Tehran began publicizing its role in the conflict. By 2016, IRGC social media platforms and state news outlets were broadcasting videos of IRGC commander Qassem Soleimani visiting the battlefront, shaking hands with and embracing foreign fighters. When massive floods hit several regions in Iran in the spring of 2019, the foreign fighters were brought in from Syria to help with flood relief efforts—actions that were also publicized by IRGC outlets and social media.

Iranian forces and their proxies have coordinated not only with the Assad regime but also with the Russian government, which began providing air support to the Syrian and Iranian effort in 2015. This marked another important development. Tehran and Moscow have a historically fraught relationship, one built on cooperation against a backdrop of tension and distrust. The war in Syria has not erased the mutual suspicion, but it has provided a sterling example of what cooperation can achieve when Iranian and Russian interests are aligned. Russian air support, closely coordinated with the IRGC and its network of foreign proxies, has been critical to the success of Iranian operations—and to keeping Assad in power.

The war in Syria marked the first time since the end of the Iran-Iraq War that Iranian forces have been exposed to real combat outside of Iran’s borders. The experience has had a profound effect on Iranian military thinking, forcing Tehran to update its military doctrines and procedures, increase its cohesion, and enhance its ability to conduct joint operations with foreign militaries. The evolution of Iran’s approach to warfare could have real consequences for the United States and its armed forces: whether directly or through proxies, the two countries are likely to continue to clash for the foreseeable future. Iranian and Iran-backed forces now operate in proximity to the U.S. military and its partners in Afghanistan, Iraq, Syria, and the Persian Gulf.

Iran’s conventional capabilities are still no match for those of the United States. What is more, the Islamic Republic still doesn’t possess nuclear weapons. Instead, the greatest threat the United States faces from Iran lies in its hybrid warfare capabilities, which Tehran has honed over the last four decades and perfected in Syria. The Islamic Republic now boasts new recruitment capabilities and an expanded network of proxies, an amplified media repertoire, and a sharpened capacity to coordinate with conventionally armed allies such as Russia.

In a possible sign of deepening ties to Russia, the two countries signed a military cooperation agreement earlier this month. The details haven’t been made public, but the pact appears to entail a significant naval component. As the United States seeks to counter increased Iranian activity in the Persian Gulf and the Strait of Hormuz against a backdrop of rising tensions, it would do well to consider what Tehran has learned in Syria. Propping up Assad has changed the Iranian way of war, although it’s not clear that anyone in Washington has noticed. 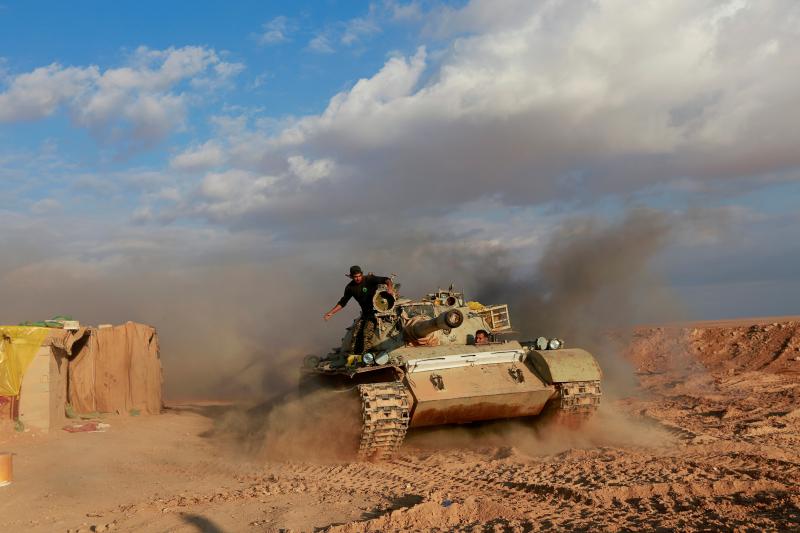 Withdrawing From Syria Leaves a Vacuum That Iran Will Fill

Shiite Militias Are in the Region to Stay 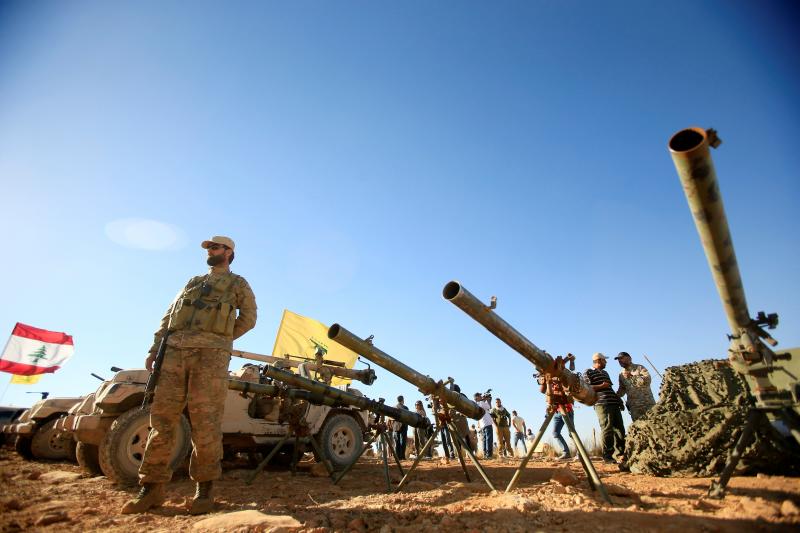