How to Revive and Reintegrate the Region After the Russian Invasion

The Russians took and held Kramatorsk, a small city in eastern Ukraine, for about three months in 2014. Since then, the only battles this town has seen have taken place in the kitchen. Or several kitchens, to be exact. Last year, on the anniversary of Ukraine’s Independence Day, government officials sparred for the titles of “Best Plov,” “Best Borscht,” and “Best Goulash.” This year there will be no Independence Day competition, since the organizer of the borscht battle was recently sacked.

Yevgen Vilinsky was the first deputy governor of the Donetsk Regional State Administration. The Ukrainian province, or oblast, he helped govern directly borders the breakaway region currently under Moscow’s control. The Donetsk area has been hard hit by war and division, and its citizens are not of one mind about their future. Vilinsky and his team had made significant progress helping the oblast rebound from the war. But when Ukraine’s new president, Volodymyr Zelensky, assumed office, he promptly began replacing everyone associated with the previous administration—including Vilinsky, who was fired on July 4.

Russia occupies seven percent of Ukraine, including Crimea and a chunk of the region known as the Donbas on Ukraine’s eastern frontier. Even within this border zone, Moscow-backed stooges occupy only part of the Donetsk and Luhansk oblasts—swaths of the Donbas remain under Ukrainian control. The fighting continues sporadically, and the Minsk agreements that were supposed to bring peace have failed. Many in Washington and Brussels still hesitate to use the term, but the occupied part of Ukraine has become an intractable pressure point that no one knows how to resolve.

Of the two provinces that make up the Donbas on the Ukrainian side of the cease-fire line, the Donetsk oblast surpasses the Luhansk oblast on virtually any index, including health, education, pensions, roads, government transparency, and income. These differences owe something to economics and geography: the Luhansk oblast relies chiefly on agriculture, whereas heavy industry has always been centered in the Donetsk oblast. But leadership matters, too.

Vilinsky would be a rare bird in any country—he’s a civil engineer, lawyer, and consultant who thinks about how all the pieces fit together—and there’s no one else like him in the Donbas. Even though they are no longer in charge, Vilinsky and his team thought long and hard about how to bring people back to the Donetsk oblast and have spent time and energy looking for new ideas from the rest of Ukraine to introduce to the region. Ukraine’s coherence as a country and its capacity to one day reintegrate the occupied regions under Russian control depend on the ability of its eastern regions to rebound from their economic and political decline.

DEPOPULATION IN THE DONBAS

Regions don’t just recover: energetic, enterprising people bring them back to life. Unfortunately, those very people were the first to flee when Russian forces marched into eastern Ukraine in March 2014. On July 7, 2014, armed gunmen showed up in the middle of the night at Donetsk National University and started taking over dorms. Many faculty and students relocated to central Ukraine, leaving the Donbas without an intellectual ballast. The region’s recovery hinges on their return.

“Education is our number one problem,” Vilinsky said to me in June.

As Vilinsky and his party are well aware, starting a prestigious, Western-style university would bring thousands of people—including students, professors, and administrators—to the Donbas. And establishing a new university would not be as hard as it sounds. The U.S. government used to do this work, and it did it well: American grants helped start the Kyiv School of Economics and the European Humanities University. The model could easily be applied to the Donbas.

While a university could help anchor the professional and intellectual classes in the Donbas, a permanent military base there would draw thousands more residents to the region, even as it would bolster Kiev’s control over its eastern flank. To absorb these new residents, the region would require additional housing—something the Donbas already needs. More than 480,000 internally displaced persons live in the Donetsk oblast. Most still dwell in temporary housing, and many live on the Russian-controlled side. A large construction drive would benefit the region economically even as it addressed a long-standing housing shortage.

The conflict with Russia has forged a new sense of Ukrainian identity, much to Russian President Vladimir Putin’s chagrin. But within Ukraine, regional differences still run deep. Life in the Donbas has long differed radically from life in the rest of Ukraine. In the industrial east, towns historically clustered around the factories, where almost everyone worked and socialized. The head of the factory played an outsize role in community affairs and was expected to care for people’s needs. Such a way of life fostered insularity and discouraged risk-taking: in general, people did not talk to strangers.

Now the culture of the region is opening up. In Kostiantynivka, a town of 75,000 people in the Donetsk oblast, young people organize summer music concerts at a defunct glass factory. The performances can draw as many as 2,000 people. One of the organizers, Sofia Pilipenko, just landed a seat at one of the top universities in Kiev but wants to return to eastern Ukraine upon her graduation.

“Our region has a lot of potential,” she told me. “The main thing is to gather people around something important and change the town we live in.”

In the central square of Kramatorsk, the city council just installed a fountain that draws dozens of people to linger and talk. Cars now stop before crosswalks; dry cleaners have sprung up in several neighborhoods; cafés dot the major streets. Even restaurants—once used almost exclusively for business negotiations—have extended their hours to accommodate families. The Donbas is changing slowly, but it is changing.

Still, a sense of difference between east and west pervades Ukraine in both directions. For Ukraine to succeed as an independent European country free from Moscow’s machinations, a strong sense of civic identity must take root.

Life in the Donbas has long differed radically from life in the rest of Ukraine.

One way to bridge the divide is to invite young people from western and central Ukraine to live in the east for a year. In 2014, the Lviv Education Foundation made a brilliant but temporary start by bringing students from Ukrainian Catholic University to rebuild homes and have informal conversations with locals, often over bonfires. The Ukrainian Leadership Academy could continue this work by opening a campus in Kramatorsk or Slovyansk. The ULA is a yearlong residential program that prepares young people aged 16 to 18 for a life of service. With financing from Western donors, the ULA could build up its faculty to open an outpost in eastern Ukraine. These types of initiatives break down stereotypes and foster a sense of national unity.

HAVE A LITTLE FAITH

The larger project in Ukraine is to increase levels of trust in a society where that precious commodity is in short supply. Ukraine’s citizens have the lowest levels of trust in their government worldwide, but people do have faith in their neighbors, volunteers, the church, and the armed forces. The problem is especially acute in the Donbas. Providing opportunities for people in eastern Ukraine to work together can help address the problem.

A community restaurant in Ivano-Frankivsk, a city of 230,000 in western Ukraine, could serve as a useful model for the Donbas. One hundred people invested $1,000 each in a beautifully constructed brick restaurant called Urban Space 100. The restaurant hosts community events at which speakers address the most heated political issues of the day. Its investors are shareholders who meet regularly to decide on speakers and topics. In Ivano-Frankivsk, where a single political party dominates the landscape, Urban Space 100 has hosted hundreds of meetings.

To most western Europeans and North Americans, the benefits of neutral public space are self-evident. There are community centers, churches, and civic clubs; people interact with strangers. In Ukraine, a communal gathering space where one’s physical safety is guaranteed is a novel concept. Creating more events venues after the Ivano-Frankivsk model would enable strangers to form bonds of trust by working together on civic programming.

Ukraine’s citizens have the lowest levels of trust in their government worldwide.

It is all too easy to paint a grim picture of the Donbas. Elderly people wait in enormous queues for miniscule pensions, and internally displaced persons are crammed into inadequate apartments. Even so, signs of life and vibrancy mark all but the smallest villages. Small businesses are popping up in eastern Ukraine, but they need access to bigger markets, which requires better transport links to Kiev.

Reopening the Kramatorsk airport would connect not only these businesses but the whole region to the outside world. Such connections would greatly reduce the sense of isolation that now afflicts Ukrainian-controlled Donbas. The nearest airport, Kharkiv, is 194 kilometers away, and the airport in Mariupol remains closed because of its proximity to the frontline. Air links would allow businesspeople to more easily come and go. More important, an airport would enable ordinary Ukrainians to discover that the Donbas is not all that different after all. 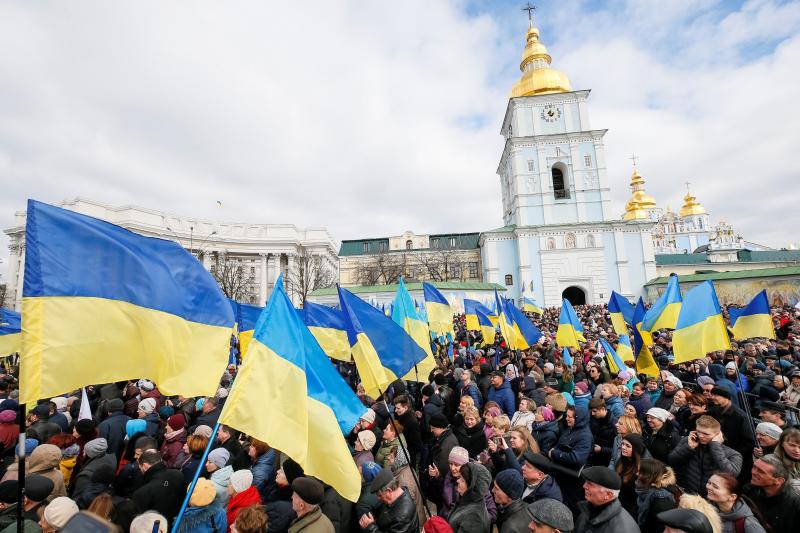 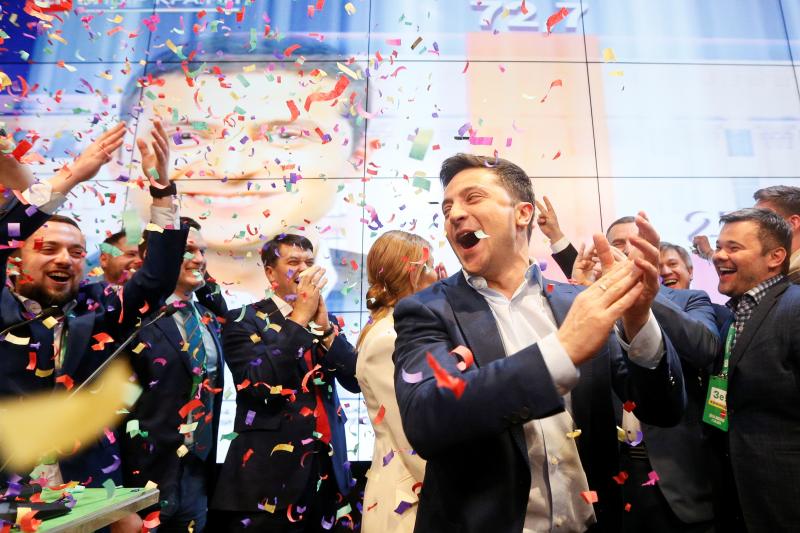