Between 2000 and 2015, the United States provided Colombia—a country plagued by political and social strife—with more than $10 billion in aid in order to bring stability to the Andean nation. The U.S. government also sent hundreds of U.S. military trainers to help reform and professionalize the Colombian security forces. Partly as a result of these efforts, the South American state signed a peace deal in 2016 that promised to put an end to five decades of armed conflict within its borders.

Implementation of these measures was meant to take place over 15 years and bore a price tag exceeding $30 billion. Washington and other foreign capitals regarded the agreement as a triumph for U.S. foreign policy in Latin America. Colombian President Juan Manuel Santos received a Nobel Peace Prize for his role in the accord.

The 2016 deal promised to disarm and reintegrate the members of the Marxist-Leninist insurgency known as the Revolutionary Armed Forces of Colombia (FARC) into Colombian society. The accord included a plan to develop Colombia’s long-abandoned countryside and a substitution program for illicit drug crops, which were fueling the violence. It also guaranteed justice for victims of the conflict as well as the right of the FARC to participate in elections as a lawful political party.

Today this agreement is in jeopardy. What’s worse, Washington has turned a blind eye to the Colombian president’s slipshod implementation of the accord. The Trump administration’s negligence may abet the spread of drug violence or reignite the conflict. To prevent this, the United States should step up its financial and political support for the full implementation of the hard-won peace deal.

In 1999, the U.S. government took a gamble on Colombia, the world’s largest producer of cocaine and a longtime U.S. ally. The United States vowed to help the war-torn nation restore order and establish the rule of law in vast stretches of ravaged territory. At the time, Colombia faced one of the worst humanitarian crises in the world. Rampant corruption plagued the country and now it faced the worst economic downturn in its history. With some 2.1 million citizens displaced by violence and more than 40 percent of the country’s territory under the control of armed insurgents, the future looked bleak.

U.S. assistance for the Andean nation via Plan Colombia (2000–2011) changed the country’s outlook. Partly as a result of the plan, the Colombian government professionalized the military and police forces, improved judicial capacity, and jump-started a period of needed economic growth. Twenty years later, Colombia has become a global reference point for counterinsurgency, law enforcement, and improved governance. Despite persistent obstacles, the country has reduced its homicide rate to its lowest point since 1975.

The Colombian government was aware that making peace with the FARC would prove harder than making war. But the authorities were slow in implementing the plan from the start. And since the country elected a new president in 2018—the conservative Iván Duque—major elements of the process have faltered. According to the Kroc Institute for International Peace Studies, by April 2019, 30 percent of the stipulations of the accord had yet to be initiated, and the government made “minimum” progress on another 34 percent.

Duque came into office promising to “correct” the peace agreement. The Colombian president appears committed to reintegrating the FARC into society for largely pragmatic reasons. But Duque is less devoted than his predecessor to the other provisions of the accord. Far-right politicians and voters have regularly insisted that the terms of the deal are too lenient on ex-insurgents accused of committing human rights abuses. Like them, Duque spent much of his first year in office railing against the transitional justice mechanism, the cornerstone of the agreement. The new president also slashed the budgets for the truth commission, a land restitution program, and rural development.

Duque came into office promising to “correct” the peace agreement.

What’s more, the Colombian state has failed to provide for the physical security of many demobilized FARC insurgents, 137 of whom have been assassinated since 2016. Killings of political and social activists from across the political spectrum have spiked in the same period. (There have been as many as 738 murders.) In the run-up to local elections in October, the first such electoral cycle in which the FARC’s party is participating, at least 26 politicians from right-wing and progressive parties alike have been killed.

Suspicious of the state, a handful of senior leaders of the FARC declared their rupture with the peace process in August and vowed to take up arms again. But Rodrigo Londoño—once the FARC’s commander and now its party leader—rejected his former comrades’ call to arms and encouraged the FARC’s rank and file to stay the course. In the days that followed, former FARC combatants from around the country took to social media to reaffirm their commitment to the peace process.

The Colombian peace process is indeed worth defending, and to advance the accord’s implementation is in the United States’ interest. Some of the very territories at the heart of the peace process have accepted more than 1.4 million Venezuelans fleeing political and economic instability. These communities could see renewed violence and economic ruin if the accord is not properly put into practice. More important, a properly executed peace deal would help stabilize the region in the long run.

The Obama administration recognized the significance of Colombia’s success and unveiled an assistance package known as Peace Colombia during its final year in office. But the Trump administration has failed to capitalize on decades of U.S. investment in Colombia’s peace and stability. In fact, U.S.–Colombian relations appear to have devolved during Trump’s tenure—from a multi-faceted partnership to a relationship seen only through the lens of the war on drugs.

A properly executed peace deal would help stabilize the region in the long run.

In 2017, President Trump went as far as to threaten to decertify Colombia as a partner in the war on drugs over rising coca cultivation, a diplomatic censure typically reserved for the United States’ geopolitical foes. The U.S. president has demanded that Duque reduce the cocaine flow or face a $160 million reduction in aid. And the administration has been equally unhelpful by demanding the extradition of senior FARC members accused of drug crimes to the United States, a violation of the terms of peace, and by endorsing Duque’s assaults on the transitional justice tribunal.

The U.S. government needs an assistance strategy in Colombia that champions peace, and that draws on the same spirit that delivered across-the-aisle consensus for Plan Colombia two decades ago. In April 2019, the U.S. Senate adopted a bipartisan resolution supporting Colombia’s efforts to pursue peace. The resolution is a good starting point, but U.S. political leadership should do more.

Colombia is at a crossroads. It must heal its war wounds and revitalize the rural economy, all the while absorbing large numbers of desperate Venezuelans. The United States can enable this transformation, helping to build a sustainable future for its long-standing partner, or it can take a punitive tack on the drug issue—but it cannot do both.

The Colombian government needs funds if it is to properly implement the peace agreement. The most expensive of the accord’s requirements are agrarian reform and investment in rural communities, which together account for 85 percent of the total cost of the peace. The Colombian government lacks the fiscal resources to deliver. The Trump administration should make more funding available for these purposes.

The influx of Venezuelans is not only costly but runs the risk of distracting authorities from the peace process. International donors have been footing the bill for 5.6 million Syrian refugees in the Middle East and Europe ($5,000 per person), but the Colombian government has received only $193 in international aid per Venezuelan in Colombia. There is bipartisan consensus in Washington on providing relief to Venezuelan civilians. As such, the U.S. government should help Colombia both keep the peace and extend much-needed charity to its neighbors.

The Colombian government needs funds if it is to properly implement the peace agreement.

The U.S. Department of State could also remove the FARC’s political party from the Bureau of Counterterrorism’s Foreign Terrorist Organization list. After all, at least 90 percent of the 13,018 ex-FARC members who have registered with the reintegration process remain committed to peace building, and FARC political leaders have put their faith in a political system in which the electoral odds are stacked against them. The European Union led the way by removing the FARC from their terrorism sanctions list in 2017.

The enduring stability of the Colombian countryside will depend on the success of constructive and sustainable measures to uproot the drug trade—a business that both funded and fueled FARC violence. The U.S. government should work with peasants to eradicate drug crops manually and substitute them with legal crops. Forty percent of families enrolled with the government’s eradication program have not yet received the payments and technical assistance from the state that were promised to them under the accord. Duque has further buckled under U.S. pressure by vowing to resume the controversial aerial spraying of drug crops with hazardous herbicides.

Recent reporting from the United Nations suggests, however, that crop substitution is significantly more effective than forced eradication measures. Instead of flatly insisting on a return to repressive tactics, the Trump administration should support programs that assist amenable coca farmers in making a transition to legal crops. Such programs agree with popular sentiment in Colombia and can help get the reconciliation process back on track.

In 1981, Colombia’s revered literary son, Gabriel García Márquez, wrote Chronicle of a Death Foretold, which famously depicts the residents of a small town where everybody knows of an imminent murder but does nothing to stop it. Unlike the protagonist in the novella, Colombia’s peace process still has a fighting chance, provided that Colombian authorities—and their partners in the United States—commit themselves to the key components of the accord. If they fail to do so, both Colombia and the United States will find themselves mourning a death long foretold. 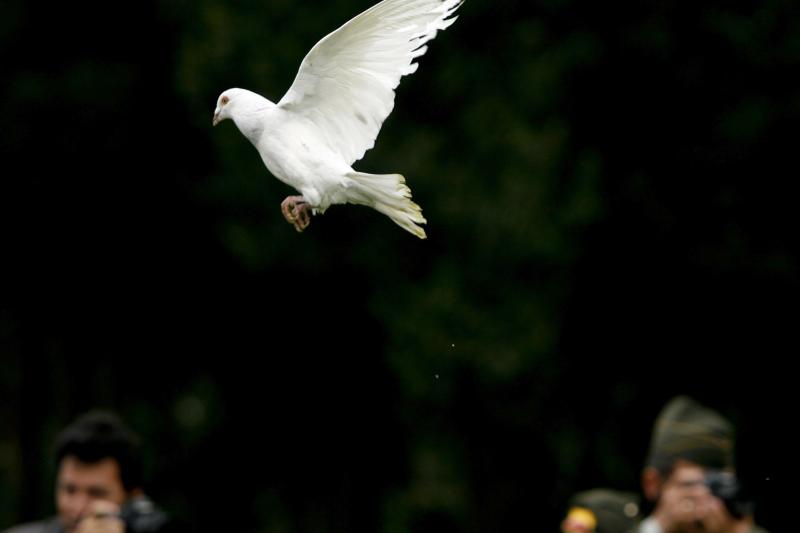 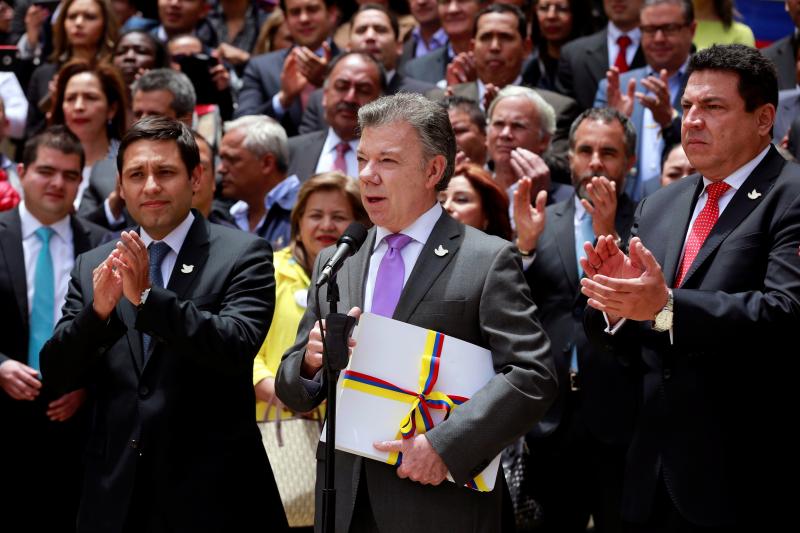 The Economics of the Colombia-FARC Peace Accord

Why Selling the Deal Based on Expected GDP Gains Is Shortsighted