Early this year, as the novel coronavirus began to spread in China, the predictions were immediate and stark: the outbreak was China’s “Chernobyl moment,” perhaps even “the beginning of the end” for the Chinese Communist Party, with geopolitical consequences that, at a time of growing U.S.-Chinese tension, would play to Washington’s considerable advantage. But then, almost as quickly, the predictions went into reverse. As China appeared to contain the spread of the coronavirus while the United States and Western Europe suffered large outbreaks of their own, the pandemic and the resulting global recession were said to mark a geopolitical reordering that would leave China as the victor. Beijing certainly saw such an opportunity, launching an international campaign stressing the failures of democratic governance and casting itself as the leader of the global pandemic response.

But it is doubtful that Beijing’s gambit will succeed in turning a pandemic that likely started in a Chinese city into a major step in China’s rise. There are real limits to China’s capacity to take advantage of the current crisis—whether through disingenuous propaganda or ineffective global action. And just as the potential for China to benefit from the coronavirus is too easily overstated, the ability of the United States to show global leadership even after its initial missteps is too easily discounted. As deeply flawed as Washington’s response to the pandemic has been so far, the United States’ power—distinct from any particular president—rests on an enduring combination of material capabilities and political legitimacy, and there are few signs that the pandemic is causing power to shift rapidly and permanently to China’s side of the ledger.

China’s initial propaganda offensive was stunningly aggressive, but it now appears clumsy and unlikely to work. The Chinese Communist Party’s narrative is limited by the simple fact that too many people know about the outbreak’s origins in Wuhan and Beijing’s bungled initial response—in particular, its efforts to suppress information and silence many of the doctors who first warned of the emergence of a dangerous new virus. In the face of calls for greater transparency, Beijing ejected American journalists working for The New York Times, The Washington Post, and The Wall Street Journal. On Twitter, a spokesperson for China’s foreign ministry accused the U.S. military of bringing the coronavirus to Wuhan. Although Beijing has backed away from this reprehensible claim in recent weeks, its approach has a whiff of desperation, which hints at Beijing’s own insecurity about the mishandling of the outbreak.

Global skepticism extends, with good reason, to China’s coronavirus statistics. Indeed, while China’s official tally of new COVID-19 cases indicates effective containment (by March 19, the number of new local infections had fallen to near zero), some in China fear that the central government has simply stopped reporting all the test results in order to keep its official count low and to maintain the narrative that it has won the war against the virus; it wouldn’t be the first time Beijing has suppressed unfavorable data.

Some leaders, of course, are embracing Beijing’s narrative and applauding its methods in combating the outbreak—including officials in Cambodia, Iran, Pakistan, and Serbia. But few of these governments have been newly persuaded by recent Chinese messaging; they have a long record of accepting Chinese political narratives and economic assistance, often at the service of their own power at home. Indeed, some early recipients in Europe of Chinese-made testing kits and protective equipment rejected them as substandard. Just this week, Finland’s prime minister fired the head of the country's emergency supply agency for spending millions of euros on defective Chinese facemasks.

Meanwhile, other leaders are already pushing back against China’s attempt to rewrite the global narrative about its COVID-19 response. European Union High Representative for Foreign Affairs Josep Borrell openly criticized Chinese efforts as “a struggle for influence through spinning and the ‘politics of generosity.’” Leaders in Brazil and India, who are facing challenges at home, have quickly turned to criticizing China and eschewing its aid. In Africa, public attention has been riveted by stories of widespread racism against African expats in southern China. And even before the pandemic started, Beijing faced a large trust deficit among its Asian neighbors. A survey of public opinion in six Asian countries, conducted by the Pew Research Center between May and October 2019, and published in late February, found significantly higher percentages of people held favorable views of the United States when compared with China.

In pushing its narrative of triumph against the coronavirus, Beijing’s approach will be compared not only to that of the United States but also to the impressive actions of many Asian countries, including several democracies. Beijing failed badly at first—due to a striking and predictable lack of transparency—and Washington is failing now. But democratic South Korea and Taiwan have performed better than both. South Korea’s impressive testing and contact-tracing regime and Taiwan’s early detection and containment efforts reflect both their governance choices and their ability to learn from past experience with pandemics. Citizens and governments looking for models are more likely to choose those democratic successes than China’s vaunted authoritarian alternative and draconian containment efforts—the real costs of which remain unknown.

Moreover, China’s economy can’t ride to the rescue as it did during the global financial crisis. Although there is a partial uptick on the supply side as Chinese factories reopen, the demand side drivers for China’s growth are in real trouble. China’s economy is too dependent on external demand from the United States and Europe to become the sole savior of the global economy. The 12 countries hardest hit by the virus today account for about 40 percent of China’s exports. Many of these countries are also China’s top suppliers of intermediate goods. China’s economy will not be able to return to its prior growth trajectory of some five to six percent annually until the economies of the United States and the European Union recover, as well. Chinese policymakers will have to hold back some of their domestic stimulus efforts until that happens, knowing such stimulus will have a limited impact if global demand is down. Funding another credit-fueled stimulus as the Chinese did in 2008–9 is off the table due to China’s high overall debt levels and the real risk of triggering a collapse of its financial system. In this crisis, the American and Chinese economies must sink or swim together.

THE PERILS OF PREDICTION

In the middle of a global crisis, the pressures to forecast the long-term, strategic implications of the emergency are legion. The problem with drawing early conclusions is that they are often wrong: analysts focus on the immediate consequences of recent events and discount the structural features of global order.

To be sure, there has been a catastrophic failure of U.S. political and diplomatic leadership in the current crisis that could cost the United States dearly in lives and international influence over the coming months. But to argue that this may portend a “Suez moment” for the United States, as Kurt M. Campbell and Rush Doshi recently did in Foreign Affairs, goes too far. It is worth examining the Suez analogy more closely. The British intervention in the Suez in 1956 was the last gasp of an empire that had long since lost the power and legitimacy to impose its will on its former colonial states. The United States had surpassed the United Kingdom on every diplomatic, economic, and military metric a generation before the Suez crisis. China’s rising military and technological power today is impressive, but China’s currency does not approach the hegemony that the dollar enjoyed in 1956 or that it enjoys today. Indeed, the United Kingdom’s share of global GDP at that time was only a fraction of the United States’ today. As the Chinese Leninists would say, the international correlation of forces in 1956 were decidedly not in the United Kingdom’s favor.

That is not the case today for the United States. Even as the United States stumbles in the current crisis, Beijing faces internal and external challenges that stem from its choices about economic and political governance at home and global governance abroad. There is scant evidence that China’s authoritarian model today has more attraction than the democratic norms embraced by many of China’s neighbors. The twenty-first century is hardly certain to be “the Chinese century,” no matter what the United States does. Rather, it is more likely to be an Asian one given the effective and efficient governance demonstrated in recent weeks, in addition to the region’s substantial and growing contributions to global innovation, productivity, and growth.

Although China’s position of global leadership is hardly assured, the United States should not be complacent—far from it. There may not be a shift of power to China, but there is an ongoing crisis of American leadership, as Campbell and Doshi rightly note in their piece in Foreign Affairs. It is essential that the United States reestablish competent leadership on this pandemic at all levels. The world clearly needs a global system of surveillance, detection testing, and pharmacological response. So far, China’s rhetoric and diplomacy have generated limited gains, but the United States and its allies must remain vigilant lest Beijing further expand its role in global governance and institutional design at a time when Washington is stepping back.

Previous global and regional crises dating back to the 1950s offer important lessons for restoring U.S. leadership. Indeed, many enduring patterns of cooperation and institutional development have grown out of moments of great duress: the United States’ security treaties with Australia, Japan, and others were signed at the height of the Korean War; the Quad framework with Australia, India, and Japan was organized in less than 72 hours in response to the 2004 tsunami; the G-20 leaders gathered for the first time in November 2008, in the midst of the 2008 financial crisis. Even after the 1997–98 financial crisis, when the United States and the International Monetary Fund demanded tough conditions that alienated much of Asia as Beijing won points for not devaluing its currency, the long-term result was more resilient and market-based economies in the region, not a shift to Chinese-style state capitalism.

If the United States is in strategic competition with China, then effective U.S. leadership should be at the service of building something positive out of the crisis rather than trying to use it to isolate and alienate Beijing. The failure of the G-7 foreign ministers to reach agreement on a joint statement (because the U.S. delegation insisted on calling the novel coronavirus the “Wuhan virus,” going against the guidelines of the World Health Organization and the positions of Washington’s closest allies) hardly constitutes an example of effective leadership. For decades, the United States has maintained power, credibility, and influence not only by virtue of its size and capabilities but also by attracting other nations to its vision for security and prosperity. A United States that is churlish and defensive about China right now is not a United States that will earn respect among its friends and allies. A United States that learns from the experiences of Germany, South Korea, Taiwan and others in pandemic management; that embraces practical and meaningful cooperation with China; and that engages with global organizations, such as the WHO, to help them reform is a United States that can use the pandemic as an opportunity to remind the world of what American leadership looks like. 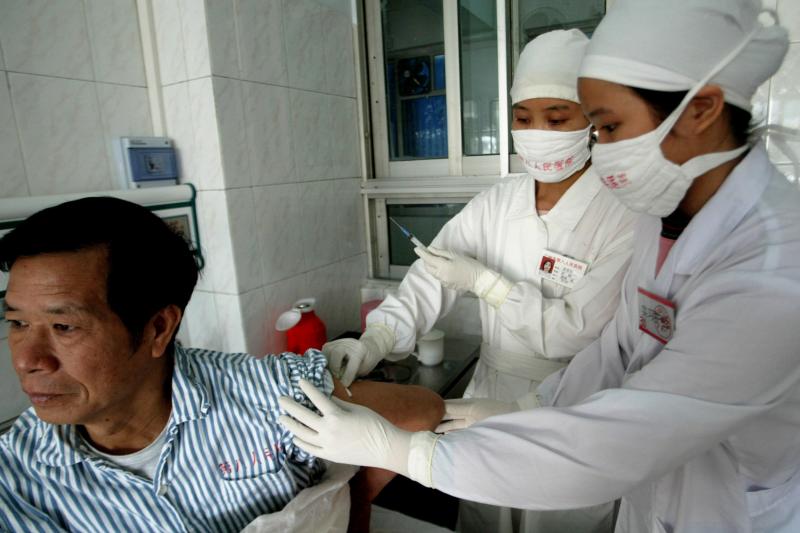 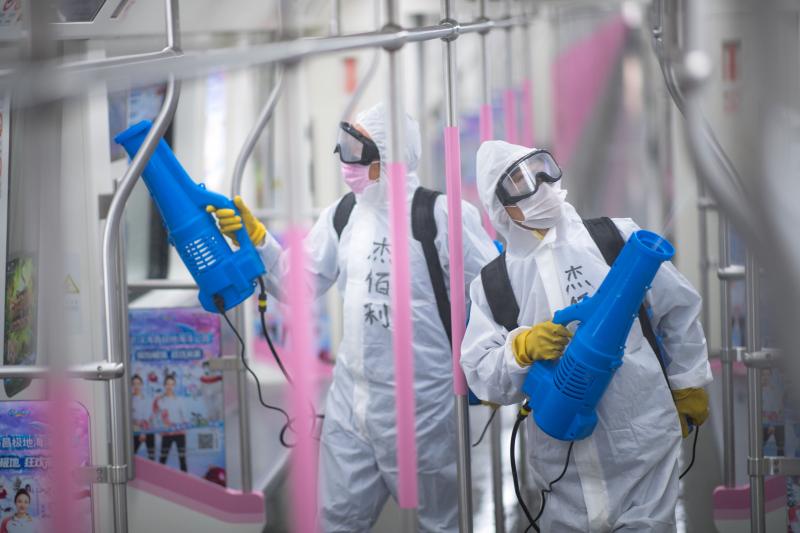 The U.S. and China Could Cooperate to Defeat the Pandemic

Instead, Their Antagonism Makes Matters Worse