Over the last four years, U.S. President Donald Trump has shown more sympathy for far-right groups, many of them armed, than any president in recent memory. At the same time, his administration has reportedly pressured law enforcement agencies to downplay the threat posed by these organizations, allowing nonstate violence to creep back into the political mainstream to a degree not seen since the 1960s and 1970s. Just last month, a group of antigovernment extremists was arrested for plotting to kidnap Michigan’s Democratic governor, Gretchen Whitmer, after she defied Trump’s demand to “LIBERATE MICHIGAN” from COVID-19 restrictions. More violence could erupt ahead of next week’s presidential election, as well as in its aftermath.

Our research considers the conditions under which armed groups interfere in electoral politics, drawing on the experiences of other countries and previous periods in American history. Our comparisons show many avenues for armed participation in politics but two important ones—when political elites endorse armed groups, even tacitly, and when governments fail to marshal a consistent and unified response toward such groups. Both avenues have become increasingly active and worrisome during the Trump presidency. And both, once open, can be difficult to close off once again.

Regardless of who wins on November 3, Trump’s presidency will have opened the door to more electoral violence in the future. If the U.S. political system begins to normalize the presence of armed groups, and if law enforcement agencies fail to deter or address the problem, future political aspirants may see an electoral benefit to cultivating these organizations. Some analysts have suggested that the United States could be headed down a path toward civil war, but a far more likely scenario is sporadic, recurrent low-level political violence—instigated or enabled by mainstream political leaders—that gradually erodes the quality of American democracy.

Armed groups become enmeshed in mainstream electoral politics in various ways, often depending on how politicians and armed actors assess the risks and benefits of cooperation. Some armed groups seek to influence the outcome of elections—for instance, by explicitly supporting candidates or publicly targeting their opponents. Politicians can also actively cultivate relationships with armed groups to advance their agendas and improve their chances of winning.

Cooperation can be hazardous to both sides, of course. Politicians may face public blowback and legal repercussions for dalliances with violent nonstate actors. Armed groups, in turn, may be accused by their supporters of selling out or being co-opted if they throw their weight behind mainstream political forces. Still other armed groups use violence in ways that do not align straightforwardly with electoral politics or serve any particular party, as anarchists do in the contemporary United States. But the potential advantages of cooperation are clear: even if violence is detrimental to the population and the political system as a whole, deploying it can bring significant electoral gains to individual political parties or politicians.

It is an open question whether the gains made by armed groups in the United States can be reversed.

For this reason, many political parties develop direct connections with armed groups—at times, developing their own unambiguously affiliated armed wings. In Bangladesh and India’s West Bengal state, for instance, parties deploy armed affiliates to advance their electoral interests. The same has been true in the Pakistani city of Karachi since the 1980s. Europe saw a similar overt militarization of mainstream politics between World War I and World War II, as did many American cities in the 1800s and, of course, the southern United States in the years following the Civil War; under Jim Crow, actors with direct ties to the Democratic Party and state governments perpetrated violence against African Americans.

A more covert militarization of politics occurs when insurgent groups create political wings that they claim are formally distinct. A classic example of this phenomenon occurred during “the Troubles” in Northern Ireland, where the Provisional Irish Republican Army and the political party Sinn Fein denied any formal relationship but in fact maintained covert but extensive institutional ties.

In addition to direct connections between armed actors and politicians, overt and covert, there are indirect ways in which elections become militarized: armed groups sometimes support or target politicians and parties even when they have no formal ties to a political movement. These groups use the resources at their disposal—from violence to their supporters’ votes—to tilt the political playing field in a particular direction. Paramilitaries in Colombia, for instance, have targeted leftists, and insurgents in Northeast India have been accused of colluding with local politicians. This kind of indirect militarization of politics is what the United States is experiencing at the moment. Although nonstate organized militias have no formal links with major U.S. parties, they often share inspiration, rhetoric, supporters, and clear political aims.

ARMED GROUPS IN THE UNITED STATES

Armed groups operating in the United States have a broad range of goals. Some are fundamentally antigovernment, which makes it hard for them to meaningfully engage with mainstream politics. Others, however, are primarily focused on fighting what they see as a rapid expansion of state power—and left-wing authority in particular. In the Trump era, these groups have increasingly directed their ire at Democratic governors and other political figures opposed to their racist visions of the American state and nation.

Some of the more recognizable groups in this realm include the Proud Boys, an armed right-wing group; parts of the Boogaloo movement, a loosely organized antigovernment organization; members of the Ku Klux Klan; neo-Nazis and similar racist groups; and other so-called militias—a loose term for a number of localized armed units. Beyond their more organized activities, many of these groups have inspired lone-wolf attacks, and some have even tried to infiltrate the U.S. military and local police forces.

Prior to Trump’s election in 2016, these groups operated mainly on the political margins and could expect condemnation from most mainstream politicians. But the president’s rhetoric has lent legitimacy to their agendas. By telling the Proud Boys to “stand by” and refusing to uniformly denounce the 2017 Unite the Right rally in Charlottesville, Trump has cultivated a favorable ambiguity around the status of militant far-right groups in the political arena. Even when he has denounced such groups, his comments have often been delayed, conditional, or intertwined with criticism of their opponents.

Trump’s presidency has opened the door to more electoral violence in the future.

But it is not just the rhetorical environment that has changed in the last four years. The Trump administration has consistently pressured the U.S. Department of Homeland Security to downplay the threat posed by the radical right, creating a more permissive environment for such groups to operate in. And in the United States’ fragmented, politically malleable, and decentralized system of law enforcement, local authorities often have the autonomy to ignore or tolerate the activities of militant groups if they want to. Others have even cultivated direct ties: during an antigovernment protest, for instance, a local sheriff in Michigan shared the stage with two of the militia members eventually charged in the kidnapping plot against Whitmer.

A core finding from research on electoral violence is that the cohesive, consistent repression and deterrence of nonstate armed groups makes a huge difference in their ability to operate. When that barrier is absent or unpredictable, groups can seize the opening to influence the outcomes of elections, especially when powerful politicians offer them rhetorical support.

It is an open question whether the gains made by armed groups in the United States can be reversed. Even if the election proves decisive and violence free, the strategies that Trump has pursued and the permissive environment he has established could be emulated by other politicians. Unless there is a clear political cost to Trump’s strategy, his relative electoral success may make embracing armed groups an attractive tactic in the future.

A worrisome, and likely, scenario is one in which groups continue to find some degree of tacit or even open support in pockets of the mainstream American political landscape, giving them space to recruit and organize. Although direct and overt forms of election-linked coercion are unlikely at this point, it is possible to imagine a future in which party activists and armed actors have increasingly institutionalized relationships. Even sporadic or low-level political violence, if it persists, has the potential to spiral in dangerous and hard-to-control ways. Fear, for example, might deter civil servants from carrying out their duties, dissuade some citizens from voting, and, more broadly, undermine the quality of elections and governance nationwide.

The best chance of holding the line against the further encroachment of armed groups into the U.S. political arena is a uniform disavowal of electoral violence by leading politicians across the political spectrum, from left-leaning Democrats to Republicans who support Trump. U.S. law enforcement agencies at the federal, state, and local levels will also need to resume neutral operations against far-right militants, treating them no differently from other extremists. Subsequent media reporting on right-wing armed groups could also help shape public opinion in positive ways. Showing these groups little sympathy would increase both the costs they face and the political risks for politicians who cultivate them.

Although it will be difficult to roll back the gains made by armed right-wing groups during the permissive Trump years, the next administration has the opportunity and the tools to combat them. Coordinated and bipartisan action can free U.S. democracy from their influence. 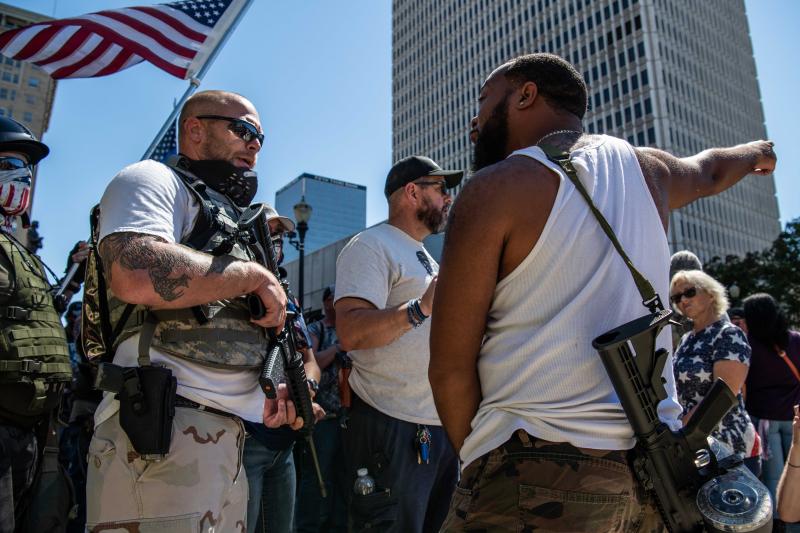 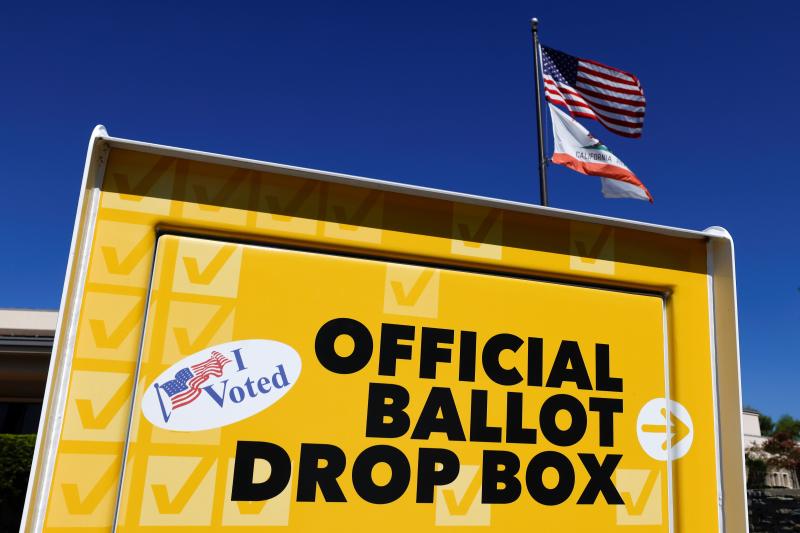