In his 1980 State of the Union address, which came in the wake of the oil shocks of 1973 and 1979, U.S. President Jimmy Carter described in grave terms the risks of losing access to Middle Eastern oil. “An attempt by any outside force to gain control of the Persian Gulf region will be regarded as an assault on the vital interests of the United States of America,” he said. “Such an assault will be repelled by any means necessary, including military force.” That pledge became known as the Carter Doctrine, and it has remained a defining feature of U.S. Middle East policy ever since.

Yet even as the driving rationale for the so-called Carter Doctrine has become obsolete, it continues to shape the United States’ approach to the Gulf—emblematic of a broader failure of U.S. policy to catch up with the broader changes to U.S. interests in the region since the 1980s. President Joe Biden should acknowledge new realities and reset the United States’ relationships in the Gulf in a way that promotes American values, keeps Washington out of unnecessary foreign entanglements, and prioritizes regional peace and stability.

There are myriad reasons for strong relations between the United States and the countries of the Gulf Cooperation Council (GCC)—Bahrain, Kuwait, Oman, Qatar, Saudi Arabia, and the United Arab Emirates. The decisions by Bahrain and the UAE to establish formal ties to Israel are a clear sign of the positive influence these countries can exert. Kuwait and Oman play powerful roles in mediating regional conflicts. The United States’ counterterrorism partnerships with GCC countries, while frequently flawed, are still crucial, as these governments often have information on extremist networks that U.S. intelligence cannot glean on its own. And the United States is broadening its people-to-people ties with the region: today, tens of thousands of students from the Gulf study at U.S. colleges and universities. Accordingly, the United States must make clear to Gulf allies that its goal is not to pull away from the region but instead to create a more substantive and stable link between the United States and the GCC.

But it is past time to admit that there is a central design flaw in the United States’ current approach to the Gulf: the top two GCC priorities for the relationship—sustaining U.S. military assistance to fight regional proxy wars and maintaining U.S. silence on domestic political repression—will, in the long run, destroy the GCC countries themselves. The United States’ objective must be to replace this broken foundation with a new system that supports a peaceful Gulf replete with stable, diversified national economies and responsive governments—the kind of future that leaders such as Saudi Crown Prince Mohammed bin Salman staunchly claim the Gulf is seeking. A U.S.-Gulf relationship built on economic, diplomatic, and governance ties, rather than just brute security partnerships, will accrue to the benefit of both U.S. and Middle Eastern interests.

The first step is for the United States to disengage from the GCC’s proxy wars with Iran. The Iranian government is a U.S. adversary, but the festering series of hot and cold conflicts in the region—in Iraq, Lebanon, Syria, and Yemen—has simply served to strengthen Iran’s influence and create cataclysmic levels of human suffering. A pullback from U.S. intervention in places such as Syria and Yemen will, no doubt, cause immediate consternation in the Gulf. By now, however, the enormous costs of the false belief that the United States can indirectly steer the outcomes in Syria and Yemen are crystal clear. In both theaters, the United States’ tepid, halfway military involvement was never substantial enough to tip the balance and has served instead to extend the conflicts. Washington suffers from a hubristic confidence in its ability to accomplish political goals through military interventions. Instead, the most significant effect of recent U.S. Middle East adventurism has been to fuel perpetual wars that embolden extremist groups and allow anti-American sentiment to grow.

It is past time to admit that there is a central design flaw in the United States’ current approach to the Gulf.

Although the United States should retain its security partnerships with Gulf nations, the U.S. footprint should be smaller. Before the Gulf War, the United States was able to protect its interests in the region without massive military bases in Bahrain, Kuwait, Qatar, and Saudi Arabia and without billions in annual arms sales to these same nations. The foreign policy community in Washington acts as if this massive military presence is now mandatory to protect U.S. interests, even though it wasn’t prior to the creation of the post-9/11 security state. U.S. bases are costly, drawing focus away from increasingly important theaters such as Africa and Asia; they create pressure on the United States to ignore serious human rights abuses lest criticism puts the troop presence at risk; and they stand out as military targets and propaganda fodder for Iran, al Qaeda, and the Islamic State (or ISIS). As U.S. Defense Secretary Lloyd Austin undertakes a global review of the United States’ military posture, the Biden administration should seriously consider reducing its military basing in the region. Reconsidering the costs and benefits of basing the Fifth Fleet in Bahrain would be a good start, as the United States’ massive footprint is becoming more trouble than it is worth.

Finally, although the United States should continue to sell military equipment to its partners, Washington should ensure that it is selling truly defensive arms. Today, too many American weapons are used irresponsibly and in violation of international law. Others, such as the recently announced Reaper drone sale to the UAE, fuel a regional arms race that runs counter to U.S. security interests. As it pulls back on systems with more offensive capabilities, however, the United States should still be willing to provide more advanced defensive weapons, such as Terminal High-Altitude Area Defense (THAAD) missile technology, that fit the Gulf’s real security threats.

If Washington does these things, Saudi Arabia and the UAE will inevitably complain that the United States is abandoning them and empowering Iran. The Biden administration’s task will be to convince them that there is an alternative to a never-ending military contest with Tehran. A regional security dialogue that includes all parties can replace the arms race and proxy wars. This may sound like a utopian fantasy, but it is far from it. The green shoots of this dialogue have been showing for years, and able U.S. leadership, applying both vinegar and honey, can begin to create a structure for détente. And although the United States should not give the Emiratis or Saudis veto power over a bilateral nuclear agreement with Iran, a regional dialogue would tie the Gulf countries closer to the United States on Iran policy and likely give the GCC greater input on any future agreement Washington makes.

The Biden administration is best positioned to test the region’s readiness for this kind of de-escalation in Yemen. The pieces that have been missing—meaningful pressure and a credible interlocutor—are now moving into position as the Biden administration ends U.S. support for offensive operations and appoints a new special envoy to support the UN peace process. The United States is the only nation that can move the ball forward. If Washington can find a path toward peace in Yemen, where an inclusive post-Hadi Yemeni government coexists with Houthi leaders as the country rebuilds with international aid, it could be proof of concept for a broader dialogue.

De-escalation should be wildly appealing to the United States’ Gulf partners. Declining oil revenues mean these nations will soon need to make hard choices between investing in economic reforms and fighting wars in foreign countries. Given these persistent conflicts and the state control of local economies, attracting meaningful foreign investment to the region is largely a fantasy. For the United States, another benefit to decreased tensions between the Gulf and Iran is fewer incentives for Gulf interests to spread Wahhabi Islam throughout the Muslim world. This ultraconservative and intolerant brand of Islam often forms the building blocks of extremist ideology, and the Gulf-Iran feud fuels its export (alongside its revolutionary Shiite counterpart).

Biden has a chance to reset Washington’s partnerships with Gulf nations.

The United States must also drive a harder bargain with the Gulf states on questions of human rights. In the wake of Donald Trump’s attacks on American democracy, it will be even more important for Biden to match his talk of the rule of law and civil rights with actions at home and abroad. The United States has difficult work ahead to rebuild its global brand, but ending Washington’s hear-no-evil, see-no-evil approach in the Gulf will help.

Still, the U.S. conversation with the Gulf on human rights should be realistic. These countries will not become modern democracies overnight. If the Gulf really wants to attract international investment, however, it must address ongoing brutal crackdowns on political dissent and the lack of the rule of law. Serious outside private investment is unlikely as long as these nations torture political prisoners, maintain a draconian “guardian system” that restricts women’s ability to travel, and constantly harass dissidents abroad. Frankly, Gulf leaders should see expanding political rights as an existential issue. The United States must help these regimes understand that their long-standing social bargain of “no taxation, but no representation either” cannot last. As population growth outstrips oil revenues, royal families will soon no longer be able to afford that payoff. Once subsidies atrophy but repression remains, a disastrous storm of unrest will brew. Luckily, there are models of limited reform in the Gulf that can help the laggards inch along. Kuwaitis, for instance, elect a parliament that maintains some independence from the crown. Although this is far from modern participatory democracy, it provides some guideposts to which more repressive regimes can look.

In pursuing this new course, some sky-will-fall adherents to the status quo will argue that if the Biden administration drives too hard a bargain, Gulf leaders will turn away from the United States and toward China or Russia. This argument is a red herring, one that plays on a misunderstanding of both the irreplaceability of military alignment with the United States and the willingness of China and Russia to get their hands dirty in Middle Eastern politics. This isn’t the Cold War: Russia has little to offer in the region, and as global oil usage continues to fall, Moscow will inevitably compete with Gulf countries for buyers. Although China will continue to look for economic opportunities in the region, it will be unwilling to play a real security role anytime in the near future. The Chinese navy isn’t going to come to the aid of a Gulf country under attack. If the Bahrainis, Emiratis, or Saudis threaten to turn to other powers, Washington can afford to call their bluff.

As a general matter, U.S. foreign policy has become dangerously anachronistic, an instrument tuned to play a song that the orchestra no longer performs. But U.S. policy is, perhaps, most inconsonant in the Gulf, where the United States’ interests have changed but its policy has not. Biden has a chance to reset Washington’s partnerships with Gulf nations. It will be difficult, painful, and arouse loud protest. But the resulting order will be mutually beneficial, advancing U.S. interests while moving Gulf states closer to the future they claim to aspire to. As they say, the most worthwhile endeavors are never easy. 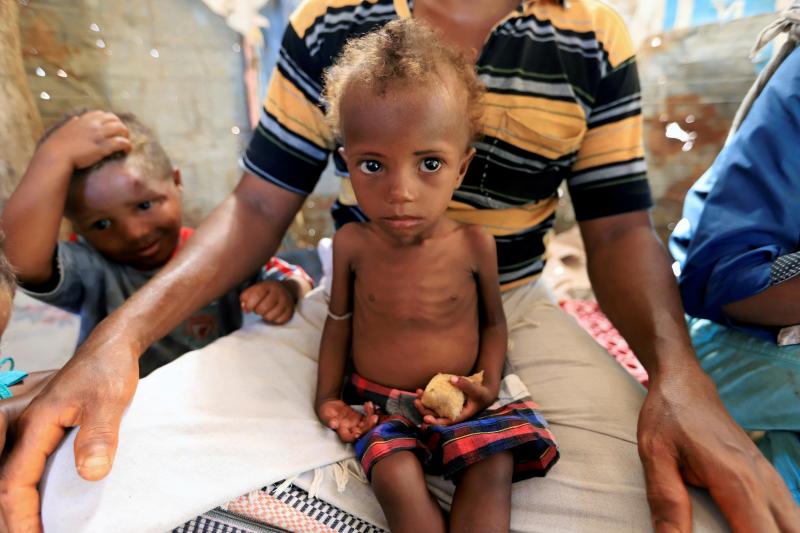 How America Enables War in Yemen