By the end of 2020, Venezuela’s per capita income will have shrunk to less than one-third of what it was when President Hugo Chávez died in office in 2013. This contraction—equivalent to three Great Depressions—is the largest documented in Latin American economic history and one of the ten largest in world history. More than five million people—or around one-sixth of the population—have left the country, and poverty rates have tripled. A country rarely suffers such a precipitous deterioration of living standards outside of wartime.

Yet Venezuela’s autocrat, Nicolás Maduro, remains firmly ensconced in the Miraflores Presidential Palace. He has refused to budge despite an economic and humanitarian crisis larger than any the continent has ever seen, punitive oil sanctions, and the fact that 58 countries recognize his rival Juan Guaidó as Venezuela’s legitimate president. In fact, Maduro is now the second-longest-serving head of state in all of Latin America (behind Nicaraguan President Daniel Ortega, whom the United States has also unsuccessfully tried to drive out of power).

In weathering all these pressures, Maduro has benefited from the actions of an unsuspecting accomplice: the United States. Maduro can rightly blame Washington for contributing to the country’s economic crisis, pointing to the aggressive sanctions that the administration of U.S. President Donald Trump has placed on Venezuela. The specter of a foreign aggressor has helped Maduro rally the military around his leadership. And the deepening economic crisis has only increased the power of the state over ordinary Venezuelans. U.S. policymakers must grapple with the uncomfortable fact that they have abetted Maduro in maintaining his grip on power.

The story of Venezuela’s collapse at first appears to be nothing more than a cautionary tale about the perils of populism. For more than a decade, Venezuela’s leftist leader Chávez benefited from the surging price of oil. The price of oil was at a low of $16 per barrel in 1998, the year that Chávez was elected, but shot up to $103 per barrel by 2012, the last year of his rule. Instead of channeling the resource boom into savings or productive investment, the Chávez administration encouraged consumption and more than tripled the country’s external debt.

The problem went well beyond a failure of macroeconomic management. During his 13 years in power, Chávez created a byzantine system of exchange, price, and regulatory controls intended to give the government full discretionary power over the activities of the private sector. He expropriated thousands of firms while making sure that virtually all those remaining in the private sector would depend on government allocations of foreign currency. He politicized and mismanaged the country’s oil industry, such that Venezuela was one of the few oil-producing countries not to expand production during the period of high prices.

The day of reckoning came in 2014, a year after Chávez’s death. Saudi Arabia decided to wage a price war against emerging U.S. shale oil producers, and oil prices plummeted as a result. The price of Venezuelan oil dropped by nearly two-thirds, to $36 a barrel in 2016. Revenues dwindled, and the government under Chávez’s successor, Maduro, slashed imports, throwing the economy into a deep recession.

This story was hardly new. As I argued in these pages in 2008, the gross contours of Venezuela’s policymaking followed in a somewhat predictable manner the disastrous experiences of many Latin American countries during the 1970s and 1980s. By 2014, Venezuela looked like another textbook case of what economists Rudiger Dornbusch and Sebastian Edwards labeled the “macroeconomics of populism” in their seminal 1992 book. Favorable external circumstances (such as, in Chávez’s case, the high price of oil) encourage certain governments to adopt aggressive fiscal and monetary policies and to overvalue their currencies. These policies lead, over time, to severe budgetary shortfalls, which invariably end in runaway inflation, falling real wages, and a drastic macroeconomic adjustment.

But if the macroeconomic crisis that unfolded in Venezuela was completely predictable, its magnitude was not. The country’s economic implosion was more than twice the size of those that followed even the most disastrous episodes of macroeconomic populism in the region, such as those in Peru and Nicaragua in the late 1980s.

Venezuela’s crisis was much worse because it coincided with the loss of the country’s main source of foreign currency revenue. Back in 2012, Venezuela produced 2.4 million barrels of oil per day. The proceeds from those sales—virtually the economy’s only source of foreign exchange revenue at the time—were enough to pay for $3,200 of imports per Venezuelan every year. By 2020, oil production had fallen to 339,000 barrels per day and could pay for less than $200 of imports per person a year.

Petrostate economies often depend on imports. Venezuela’s was no exception. Most of the non-oil sector activity in these economies is viable thanks only to the availability of imported goods bought with dollars that the oil industry produces. Services make up a large share of the country’s GDP, and the few tradable goods that Venezuela produced (car assembly, for example) require significant imports. An economy such as this is bound to implode when oil exports collapse. More than nine-tenths of Venezuela’s export revenues disappeared after 2012, leading to a contraction of immense proportions.

THE CRIPPLING EFFECT OF SANCTIONS

Petrostates are interested in self-preservation, so they don’t often kill the goose that lays the golden egg.  Over time, Caracas came to manage a large portion of its oil sector through joint ventures with multinationals such as Chevron, Eni, and Total. Partly through these arrangements, it stabilized oil production at 2.4 million barrels per day between 2008 and 2015. But the model came under intense pressure in 2016 when the price of oil fell below $30 for the first time in more than a decade. Plummeting prices led many firms to cut production. Oil prices recovered in 2017—but curiously, Venezuela’s oil output continued to decline.

U.S. sanctions had a good deal to do with the ensuing collapse. In August 2017, Washington barred the Venezuelan government, its state-owned firms, and its joint public-private ventures from international credit markets. The Trump administration then banned all oil trade between Venezuela and the United States in January 2019. This February, it sanctioned foreign firms, such as Russian energy giant Rosneft, that help transport Venezuelan oil to non-U.S. markets. Venezuela’s oil output sharply declined following each of these sanctions decisions. Some estimates attribute nearly all the post-2017 output loss to the effects of U.S. economic sanctions.

Venezuela’s economic implosion is a combination of two crises.  The first one, which took place between 2013 and 2016, represents the standard and expected unraveling of a populist-run economy. Yet from 2016 on, a political crisis spilled over into the economy.  It was this political crisis that would be the death knell of the country’s oil industry.

U.S. sanctions are thus part of a broader story in which a political crisis becomes so toxic as to bring down an economy. The crisis began in 2016, when Venezuela’s opposition petitioned for a referendum to recall Maduro from power. Maduro blocked the vote—which he would surely have lost—in October of that year. An angry opposition then used its control of parliament to prevent the government from accessing international financing. By early 2017, the opposition-controlled National Assembly was making clear to foreign banks and financial intermediaries that it would contest the legality of any lending to the Maduro regime. In response to the regime’s assaults on democracy and human rights, the opposition and its backers—including the United States—set out to raise the legal and reputational risks of doing business with Venezuela so high as to be prohibitive for most respectable actors.

The strategy has failed at getting Maduro to back down, but it has dealt a huge blow to the Venezuelan economy. A large majority of Venezuelans oppose U.S. oil sanctions—71 percent, according to a survey by local pollster Datanálisis. The country’s embattled opposition has put itself in the impossible quandary of trying to explain to Venezuelans why their lives should be made even harder. Unsurprisingly, Guaidó’s approval rating has plummeted to 24 percent, according to Datanálisis.

That Maduro has been able to tighten his grip on power during this ordeal should come as no surprise. As David Cohen and Zoe Weinberg argued in Foreign Affairs last year, sanctions can be effective in persuading some governments to change their conduct, but they are completely ineffective at getting authoritarian governments to relinquish power. If anything, they can have the opposite effect: sanctions convince autocrats that they have no viable exit options and lower the chances of a successful negotiated transition.

In functioning democracies, economic crises often lead citizens to vote out ruling governments. Authoritarian regimes, by contrast, often extend their power over societies when people become poorer. Put simply, buying people’s obedience is cheaper when people are more desperate. For example, when Chávez campaigned to get reelected for a third time at the height of the oil boom in 2012, his government offered to give his followers brand new apartments fully stocked with Chinese-made appliances. Six years later, Maduro doled out ten-dollar cash bonuses to prospective voters. For the many Venezuelans earning only two dollars a month, Maduro’s handout was much harder to turn down.

As Venezuela’s economy becomes more informal, and as criminal elements come to dominate it, the regime’s hold on power grows stronger. In the country’s Amazon, armed gangs have overseen an explosion of illegal mining activity with the tacit cooperation of the country’s security forces. Maduro secures allies in the military by distributing control over such lawless fiefdoms.

Maduro has also been able to call on the help of allies that are in one way or another at odds with the United States. China and Russia have willingly rolled over loans and provided humanitarian assistance to deal with the pandemic. Iran has sent shipments of much needed gasoline and is helping Venezuela repair its oil refining infrastructure. Turkey has been one of the main buyers of Venezuelan gold. As the Trump administration picks more fights abroad, its adversaries join forces.

Maduro’s government has adapted to straitened circumstances in order to survive. It has embraced dollarization and significantly reduced fuel subsidies. Ordinary Venezuelans have also played their part. Migrant workers now send around $4 billion home in remittances, helping sustain the economy. This year, for the first time since the 1920s, Venezuela will receive more dollars from remittances than from net oil exports.

Two decades into Venezuela’s tarnished revolution, the South American country’s economy has become the very emblem of the savage capitalism that Chávez made a career of denouncing. Although a minority of Venezuelans benefit from remittances and from the trickle down of the country’s criminal economy, the brunt of Venezuela’s humanitarian crisis falls on the most vulnerable people. Nearly one in three Venezuelan children have abnormally low height for their age as a result of acute malnutrition.

A political transition in Venezuela is uncertain at best.  In the meantime, Venezuelans require urgent protection from the effects of the country’s crisis. Earlier this year, the opposition-controlled National Assembly and the Maduro government signed an agreement that allowed the country to import 370,000 COVID-19 test kits. A similar initiative should allow Venezuela to regain access to international oil markets on the condition that the proceeds from oil sales be put to humanitarian uses under the supervision of international organizations. The international community should work to help bring the parties together to negotiate such an agreement.

U.S. policy toward Venezuela requires deep reconsideration. Dislodging an authoritarian government is hard—and local political dynamics are likelier to accomplish it than external pressure. The United States has effectively asked Venezuelans to pay the price for Maduro’s atrocities. Continuing to do so will not win hearts and minds. On the contrary, it will further insulate the regime from its own failures and abuses. 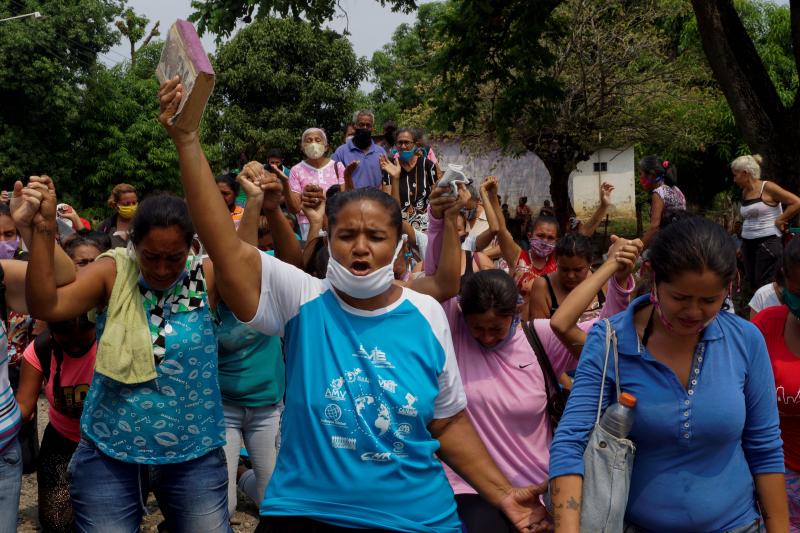 A Perfect Storm for Venezuela 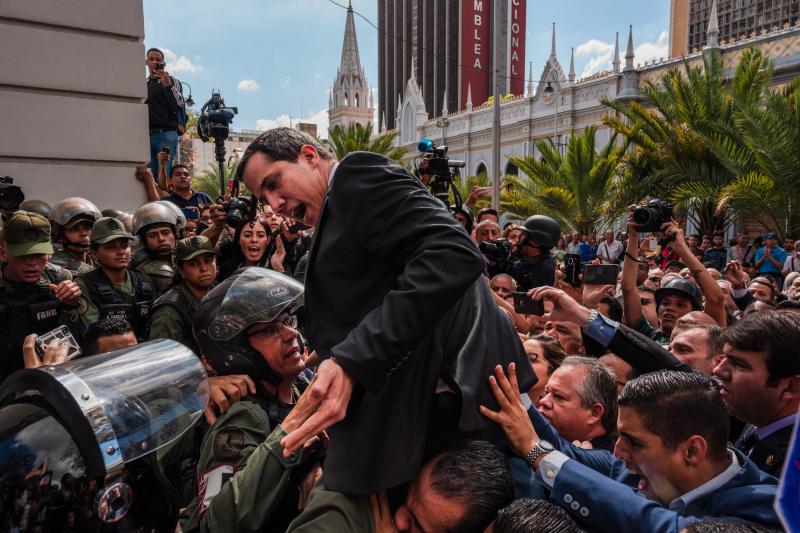 Maduro’s Mess Has Little to Do With Ideology