Ahead of the United Nations climate conference in Glasgow, the Biden administration released several reports last week about the grave security threats posed by a warming planet. Together, the reports painted a grim picture of mounting geopolitical tensions and competition for resources and technologies. But their findings also underlined an indisputable fact about climate change: its costs are already being experienced far more severely in poor countries than in wealthier ones, and that trend will continue. One report estimated that climate change will displace as many as 143 million people in Latin America, South Asia, and sub-Saharan Africa by 2050. Another noted that the “intensifying physical effects of climate change . . . will be most acutely felt in developing countries, which we assess are also the least able to adapt to such changes.”

As world leaders meet in Glasgow, much of the attention will be fixed on the negotiations between the big powers, such as China and the United States. But any meaningful and just agreement to emerge from the conference must take seriously the debt that wealthy countries owe to those that have done little to cause climate change—a crisis from which they now disproportionately suffer. This debt has received decades of lip service but prompted little real action. That must change when the world gathers to recommit to the fight against global warming.

Over the last three decades of climate negotiations, wealthy countries have often acknowledged their role in contributing to global warming as well as the climate debt they owe to poorer countries. But wealthy countries have routinely failed to live up to their responsibilities. At UN climate talks in the 1990s and in the first decade of this century, rich countries refused to admit the full scale of the problem their emissions have caused and declined to cut them. Had they felt greater urgency then, the current climate emergency would not be nearly so dire.

At the 2009 climate summit in Copenhagen, wealthy countries pledged to transfer $100 billion per year by 2020 (a fairly small sum given the scale of the challenge) to help developing countries prepare for the changing climate and transition to greener economies. This commitment reflected in part a recognition of the deep injustice at the heart of the climate crisis. But wealthy countries failed to deliver the promised sums. Moreover, they consistently overlooked calls from civil society groups for funding to focus on adaptation to climate change and the protection of vulnerable communities and lives in the global South. Instead, rich countries have preferred to funnel what little finances they have mustered to efforts to reduce emissions in poor countries.

In some cases, it is too late for communities to adapt to the warming planet; climate change has already inundated their villages or made their farmland impossible to cultivate. Wealthy countries have acknowledged their obligation to compensate poorer ones for these permanent losses and for the damages poor countries have already suffered as a result of climate change. That understanding was formalized in 2013 under the aegis of a UN-sponsored forum and reiterated again in the 2015 Paris climate accord. But wealthy countries have not followed up their warm words and promises with action and have instead actively blocked attempts to secure this kind of compensation for developing countries. Not only have these failures left poorer countries unsupported; they have also chipped away at the essential trust necessary for a multilateral diplomatic process to succeed.

The summit in Glasgow is an opportunity for wealthy countries to seriously mend their ways and begin to pay their climate debt. U.S. President Joe Biden’s predecessor, Donald Trump, hampered international collaboration around climate change in both rhetoric and deed. Now, Biden has a chance to adopt a different, more constructive approach, leading others in making bigger and bolder commitments. If the wealthy countries of the West want the rest of the world to take them seriously as global partners, they can to do three things at the upcoming climate conference.

First, the wealthy countries need to agree to transfer more funds to poorer ones in line with their responsibilities and capabilities as the world’s richest countries and largest historical polluters. Ahead of the summit, they have announced a new plan to raise the full $100 billion by 2023. But even that belated action is an acknowledgement of a broken promise. Yes, the Biden administration understands better than its predecessor the urgency and possibility of the moment. The president announced in September at the UN General Assembly that the United States would double its annual contribution to help developing countries adapt to climate change and transition to renewable energies. But the United States and other wealthy countries should embrace more ambitious funding goals. The sum of $100 billion is just 13 percent of what the United States spent on its military alone in 2020. Moreover, the $100 billion is a shared total split between 23 major historical polluters. It is also much less than what poor countries need to deal with ever-worsening climate impacts.

The summit in Glasgow is a chance for wealthy countries to seriously mend their ways.

The Overseas Development Institute recently assessed the contributions made to this climate funding goal by the 23 wealthy countries in terms of their gross national incomes, cumulative carbon dioxide emissions, and populations. The United States currently contributes $5.7 billion, which Biden plans to double to $11.4 billion—but only by 2024. Biden cannot be sure he will even be president after 2024. The ODI analysis has calculated that based on population, the United States’ fair share of the $100 billion is actually $34.7 billion. Based on its gross national income, the correct figure should be $45 billion, and in terms of its cumulative emissions, it should be paying $50.6 billion.

The increased funding is a move in the right direction, but Biden’s rhetoric about 2024 rings hollow for developing countries that expected this money last year to deal with the storms, droughts, and rising sea levels afflicting their people now. Civil society groups in the United States have insisted that much larger amounts—on the order of $800 billion per year over the next decade—are required for the United States to do “fair share” in the global effort to tackle climate change.

Second, the wealthy countries need to get serious about their gargantuan pollution problem. Increasing climate finance for the developing world is needed urgently, but such a boost will make little difference unless rich countries seriously cut their own emissions; it is tantamount to fixing a hole in the roof with one hand while setting fire to the house with the other. A country the size of China, the biggest emitter, no doubt must take responsibility for its role in the crisis, but it still has a per capita emission rate that is half that of the United States. (And invariably, that difference is actually much larger if historical contributions to atmospheric pollution are factored in.) Wealthy countries must commit to new accelerated timeframes to fulfil their emissions reductions targets from the Paris climate accord and, crucially, demonstrate concrete policy action to achieve those targets, including phasing out coal, ending public finance for fossil fuels, and redirecting funds to renewable energy.

Biden, for his part, must recognize the calamitous path currently charted by his country. The United States’ planned expansion of oil and gas production in the next decade is so large that it is equivalent to the next five biggest expansions of fossil fuel production in other countries combined, according to the Stockholm Environment Institute. In its first six months, the Biden administration approved new oil and gas drilling permits on federal lands at a higher monthly rate than was seen during most of the tenure of the president’s much-maligned predecessor. U.S. officials have claimed that the most recent report of the Intergovernmental Panel on Climate Change—described by the UN Secretary General as a “death knell” for the fossil fuel industry—does not present “sufficient cause” to curtail offshore oil and gas exploration planned in the Gulf of Mexico. The United States’ planned expansion of fossil fuel production is a clear and present danger to the whole world. These facts do not align well with the United States’ public diplomacy about “climate leadership” nor are they easily forgotten or ignored by those affected by climate change.

Third, wealthy countries should abide by the Paris accord and deliver compensation to poorer countries for the permanent losses and damages caused by climate change. There are no adaptation measures that can help a community whose island home is lost to rising sea levels or whose farmland turns to desert due to rising temperatures. For these and similar impacts, countries agreed to a “loss and damage mechanism” that would decide appropriate compensation. Little progress has been made over the past five years on this front. Adding some substance to the mechanism at Glasgow—by guaranteeing its funding, for instance—would be a real sign that wealthy countries are taking their climate debt seriously.

The climate summit in Glasgow is an opportunity for Biden and other Western leaders to put a long history of inaction behind them and come to grips with the full dimensions of the crisis. They can help forge a new era of international cooperation, recognizing their culpability as major drivers of the climate crisis and supporting efforts around the world to break free from fossil fuel dependency. Not only will such action help pay down the developed world’s vast climate debt, it will also create the conditions for a healthier and more prosperous planet. 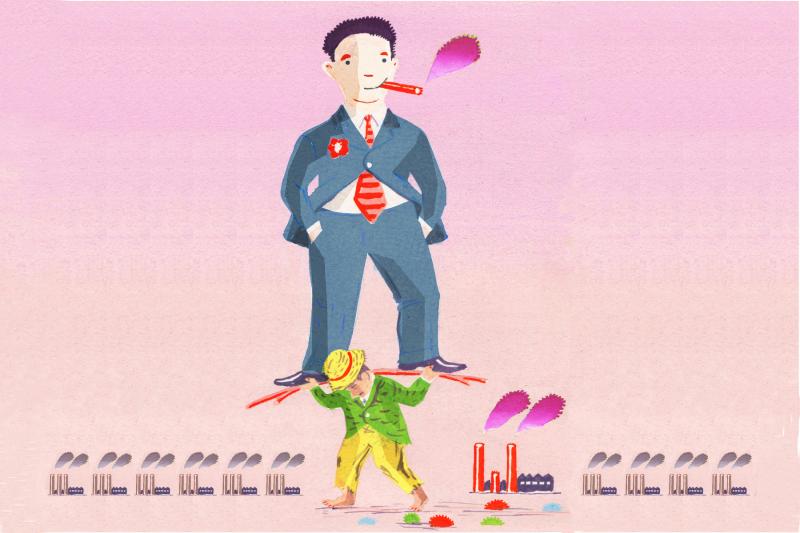 What the West Owes the Rest 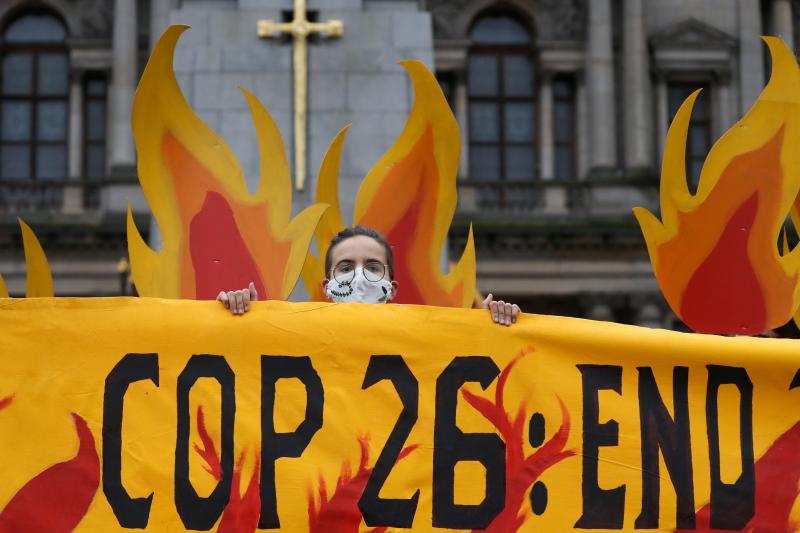